A recent UK Government document on funding for Syrian “opposition” details bankrolling of White Helmets, fraudulently called the “Syria Civil Defence”. They are nothing of the sort, they are not Syrian (established in Turkey and Jordan by British private security “expert”, James Le Mesurier) and they have stolen the name of the REAL Syria Civil Defence established in Syria in 1953.

This document demonstrates that White Helmets are financed via Dubai/Netherlands based Mayday Rescue set up by James Le Mesurier one year after he created the White Helmet brand. 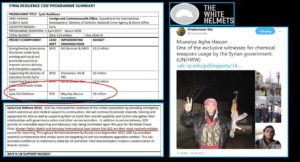 According to this document, Amnesty International and Human Rights Watch rely heavily on terrorist affiliated White Helmets as their key witnesses in their campaign to criminalize the Syrian Arab Army and government.

Historically Amnesty Intl and HRW have played a role in fomenting and facilitating conditions for war in a number of countries including Iraq and Libya, now Syria. In all cases, they have acted as a support mechanism for “regime change” faux humanitarian interventionist wars waged by the US Coalition of Terror.

Recently the UK Foreign Office admitted to financing the SOHR (Syrian Observatory for Human Rights) almost £ 200,000 – to buy pens, computer equipment etc… so the SOHR another key narrative supplier is proven to be compromised while also known to be a one-man band in Coventry that runs a laundry business on the side, yet is considered a purveyor of reliable information on Syrian conflict (via Skype). 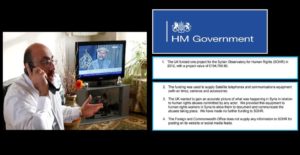 The “regime change” war has been a costly exercise for the UK, and its taxpayers who have indirectly financed the destabilization project in Syria in favor of the Zionist state.

I would like to clarify one thing regarding the White Helmets – it is tempting to make statements that James Le Mesurier is MI6 because of his connections to a number of suspect organizations. However, it is not a proven fact and should not be stated publicly, as such misinformation undermines the serious investigation that has been ongoing into the White Helmets.

If we fall into the trap of sensationalist counter propaganda – we are no better than the corporate media – we have truth on our side, most of it coming from the Syrian people – the presstitutes have to defend lies. We should have the confidence in our facts and not need to embellish.

Who is promoting the White Helmets? (Read: https://goo.gl/St3Pbz)