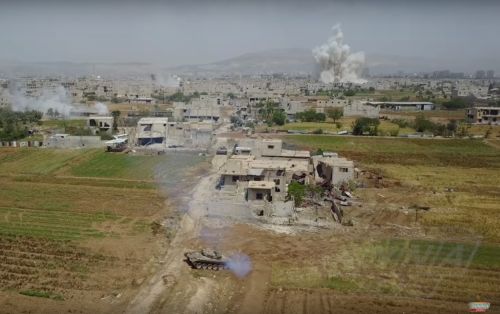 Anna News reporter: “On April 19, 2018, the Syrian army launched an operation to liberate the suburbs of Damascus in the area of the Palestinian refugee camp Yarmuk. The offensive went on several directions at once, but the most successful government forces reached from the south in the region of Hajar al-Aswad. Here among small farms it was possible to make full use of the main advantage of the Syrian army – armored vehicles. The same strike was made at the junction of the defensive lines of the terrorist organizations ISIS * and Hayat Tahrir al-Sham * (organizations banned in Russia). A powerful onslaught and long-standing hostility between the two factions ensured the success of the Syrian army. Our film crew accompanied the operation and witnessed the collapse of the terrorists’ defense in the Hajar al-Aswad area. We managed to shoot a lot of exclusive frames, including tank fights in urban areas.”