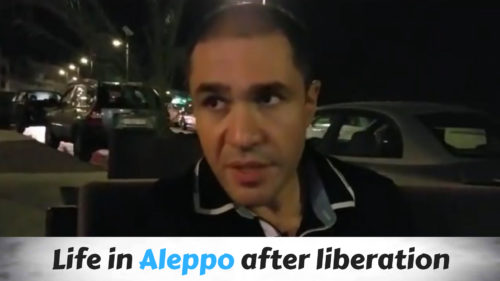 Bartlett writes: “In Aleppo recently to see the difference between the Aleppo I got to know from four visits in 2016, when terrorists were bombing and sniping civilians, the Aleppo I saw in June 2017 and Aleppo now.

Aleppo now is a totally different city, not plagued with chronic total lack of electricity and water (there are still power cuts, but also long bouts of power, I was told), and above all not fully bombarded by terrorists. Sadly, terrorists in the countryside still manage to bomb areas of the city, so it isn’t full peace just yet. But in spite of that, the will to live and rebuild is heartening and impressive.

Here is a conversation I had with Aleppo MP Fares Shehabi/ Faris Shihabi while in Aleppo, with thanks to him for his time and his powerful words.”

Read: Aleppo: How US & Saudi-Backed Rebels Target ‘Every Syrian’