Now that the Syrian Army has launched an operation to cleanse Palestinian Yarmouk camp in Damascus from ISIS and Al Nusra (Al Qaeda in Syria) after years of occupation, fake news outlets are exploiting the event to provoke outrage from the Pro-Palestine bloc against the Syrian Government and the Syrian Army.
A failed attempt to strip Syria from its title as the backbone of resistance for Palestine in the region.

What’s impressive is that the same people shedding crocodile tears for the Palestinians in Yarmouk do NOT recognize the Palestinians right of return to their homeland. Instead, they push for settling agendas to keep the Palestinians in the hosting countries and dissolve their identities within those societies which were Israel’s plan all along.

A reminder that in 2017 Hamas (the leading resistance group) declared war on ISIS cells in Gaza and killed/arrested everyone linked to the terror group. Were they also fighting the Palestinians then?

Did you even know that most forces on the ground fighting against the Terrorists in Yarmouk are Palestinians from Yarmouk themselves? Most fighters belong to Palestinians militant groups allied with the Syrian Army such as “Fath al intifada”, “al Jabha Al Shaabiya”, Kuwat Al Saiqa”, “Jabhal al Nidal Al Shaabi”, “PLA” and “PFLP”.

Don’t blame Syria for what is happening to the Palestinian refugees in Yarmouk camp while you cheer for the radical “rebels” who paved the way for even more radical jihadists to occupy the camp and starve its people
(Watch what this Palestinian women in Yarmouk said to the “rebels”: https://bit.ly/2F6bWxO )

Throughout history, the Palestinian leaderships got themselves into unnecessary conflicts and wars such as the Lebanese civil war, Jordan’s black September and the gulf war. It is only normal for the warring sides to treat them as such and not as “neutral guests”. (Excluding civilian refugees from this narrative).
What happened in Yarmouk in 2012 was the fault of the “moderate rebels” who conquered the camp and forced the Syrian Government to retaliate, they later surrendered the area to ISIS and Al Nusra who also had local recruits within their ranks.

It is ISIS we are talking about.
What is the government suppose to do? Allow them to reign in the capital’s suburb and terrorise civilians in the camp and in Damascus on daily basis?

Stop acting like you care about the Palestinians in Yarmouk suddenly when the Syrian Army is on the verge of recapturing the last remaining terrorist stronghold in Damascus.
You were silent for years when the Palestinians were being Terrorised daily under ISIS rule.

Here is a picture of Palestinians waving the Syrian Flag along the Palestinian Flag in Gaza during the March of return days ago. 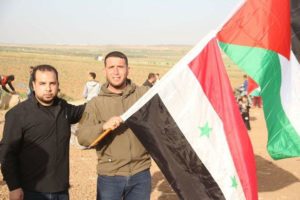 Syria will forever remain the backbone of the Palestinian cause. Read some history and you’ll know why Syria is today suffering from a global war on its soil.