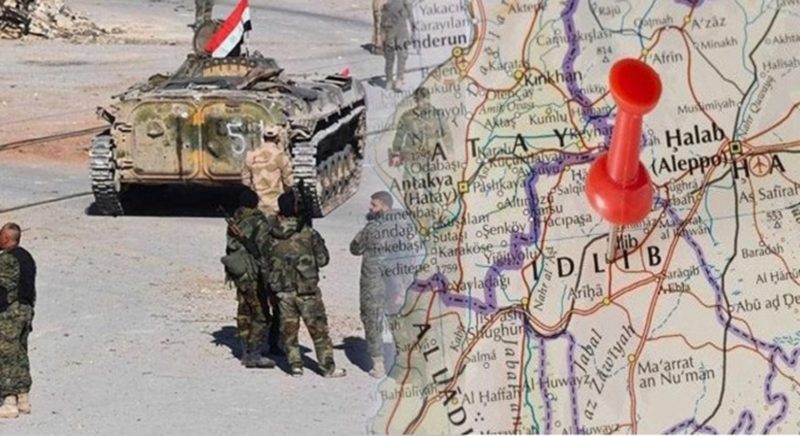 Anxiously waiting, this expression most accurately describes the atmosphere prevailing around the Syrian province of Idlib, which remains the only region of the country that is fully controlled by the armed opposition groups.

Opposition forces are concerned about the actions of government troops, that are seeking to go on the offensive in the provinces of Hama and Latakia, which border on Idlib, and also inflict airstrikes on militant positions in Idlib itself. In this regard, representatives of the factions accuse Damascus of violating the agreement on the demilitarized zone, concluded with the mediation of Russia and Turkey.

Syrian authorities reject these accusations, emphasizing that the fighting is conducted outside the territory defined by the agreement and airstrikes on the positions of terrorists in response to the shelling of areas under government control.

At the same time, the restoration of control over Idlib undoubtedly remains one of the key objectives of Damascus. However, to achieve the desired Syrian government needs to maintain not only military and also diplomatic victory to enlist the support of Russia and Iran and at the same time prevent a harsh reaction of Western states and Turkey.

This task will not be easy to accomplish. Idlib’s security is guaranteed by the agreements reached in 2017 in Astana, as well as the Russian-Turkish agreement signed in September 2018 in Sochi. This made it possible to create a buffer zone and to place on its perimeter Russian, Iranian Turkish observation posts. Such measures reduced the tension of the confrontation but did not completely stop it, with each other blaming each other for violation of agreements.

The opposition accuses the Syrian government of attacking civilian targets. According to statements by opposition activists, as a result of the actions of Syrian and Russian aviation over the past three months, more than 200 civilians were killed, dozens of civilian infrastructure were destroyed. These accusations of the international community cause a sharp reaction, which is often their main goal.

Immediately after the Syrian and Russian aircraft stepped up strikes against militant positions in Idlib international human rights organizations began to talk about the threat humanitarian catastrophes. Human rights activists fear that the escalation of the conflict will lead to the death of civilians and provoke another wave of the migration crisis.

Speaking while seeking to achieve international condemnation of the Syrian government, the opposition sometimes uses questionable means. The latest example of this was the accusations of the Syrian military in the use of chemical weapons in the province of Lattakia. Opposition statements immediately responded by the United States, Great Britain and France were quick to express concern about the incident, and even announced the presence of signs confirming the use of toxic substances. However, just a few days later, it turned out that the messages did not correspond to reality, but their source was the “Islamic Party of Turkestan”, one of the terrorist groups operating in Syria.

It is the presence of terrorists that is the main argument in favor of the growing offensive operation in Idlib. In this case, the terrorist threat emanating from the province, say not only the Syrian authorities. “The province of Idlib became Al Qaeda’s largest asylum,” Brett McGurk acknowledged as early as 2017, who at that time held the post of the special representative of the US president for Syria.

If the situation has changed since then, only for the worse. The “Hayat Tahrir al-Sham” is the “Al Qaeda” branch in Syria, succeeded in establishing almost complete control over the territory of Idlib. It should be noted that during the time of local domination, the leadership of HTS had managed to declare a breakdown in ties with the “parent organization”, but this had little effect on the militant ideology and methodology. In addition, the place of HTS was taken by another radical group, “Huras ad-Din” which is positioning itself as the Syrian branch of “Al Qaeda”.

The hegemony of HTS is based not only on the military on the structure of administrative control created by terrorists. The so-called “Government of national salvation” controlled by the HTS operates in Idleb, including several specialized ministries and an extensive network of municipal councils.

In addition to the HTS, there are several groups in the “National Liberation Front”, consisting of the “Uygurs“, IPT, Uzbek and Chechen militants. In addition, over the past few months, members of the Islamic State who fled from the eastern regions of Syria have moved to the province.

The regular result of a large number of conservative groups is the state of permanent conflict. In Idlib, acts of terrorism, killings and abductions occur daily, which go completely unpunished.

The experience of the past few years shows that if the interested parties do not take measures to improve the situation in Idlib, in the foreseeable future the situation will only get worse. You can say that “there are no good options for action”, but one cannot but admit that the problem of Idlib needs to be solved.

Authour: Khaled Iskef, a Syrian journalist and general manager of the Syrian Documentation Center, and the correspondent of Al-Mayadin channel in Aleppo.