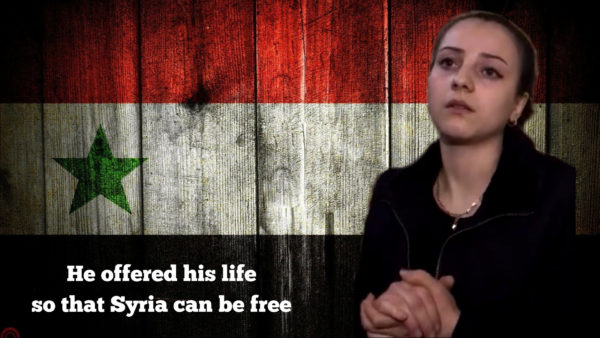 Independent British journalist, Vanessa Beeley met Hala Abu Halawi in January 2018 in Salamiyah. Hala is a beautiful young girl whose husband was killed fighting with the Syrian Arab Army to defend her hometown and her country. Like so many families in Salamiyah, Hala expressed great pride in her husband’s martyrdom but the sadness in her eyes told Beeley she has lost her love and the father of her child.

Her husband, Fadi Afif Al Qasir was killed defending Western Salamiyah from terrorist attacks. He was 31 years old. Hala proudly showed me their wedding photographs, a stunning young couple just beginning their married life with so many hopes and dreams.

A full transcript of Hala’s words:

My husband was martyred and offered his soul, to defend our homeland.

Before my husband served the people, he would go with the groups, that had set up to defend Salamiyah, to defend my homeland.

He offered his soul and offered everything he has so that Syria can be free.

In regard to President Mr. Bashar al-Assad…

…he offered us all facilities, starting from the smallest thing of food to all else securing our lives, to secure his son’s life [Hadi Afif al-Qasir’s son], to secure all of our requests.

We are wives of martyrs. If we ever wanted anything at all all of our requests are guaranteed, and only from Mr. President Bashar al-Assad.

And that is pride for us, to be given anything we need.

We are in Syria, we are going to stay our whole lives here, and we will defend Syria until the very end.”