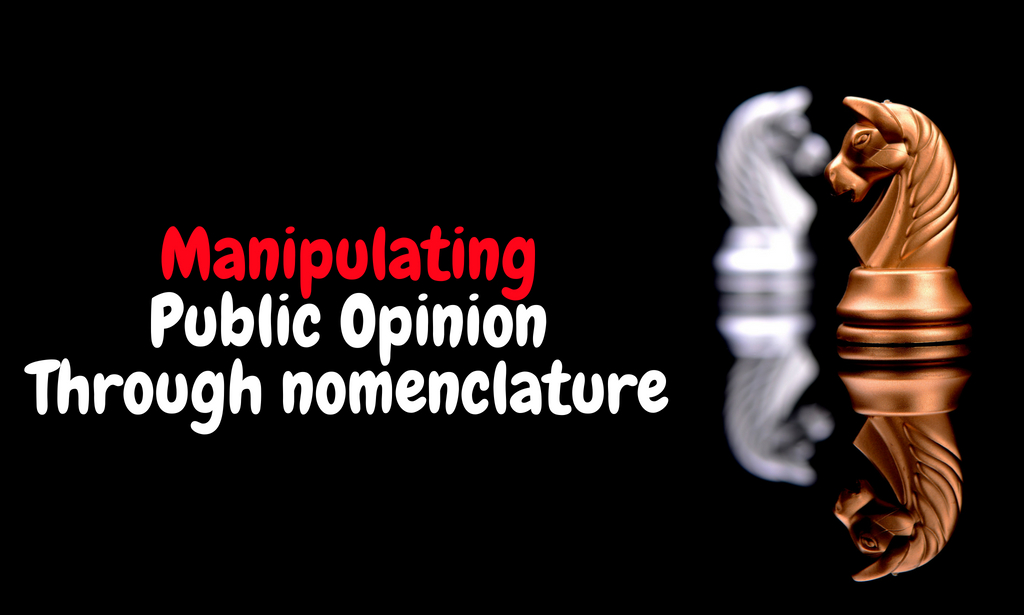 What’s in a name? That which we call a rose

By any other word would smell as sweet.

So Romeo would, were he not Romeo called,

Retain that dear perfection which he owes

Without that title. (Shakespeare)

Through the aforementioned words, Shakespeare tackled one of the most controversial ideas in human history: the futility of names and labels. Many lovers can relate to Juliet’s rhetoric which, in fact, makes perfect sense, since language is arbitrary. A tree, for example, would not lose its qualities if it were called by any other name. But, what happens when words turn into cultural constructs or when they become so complex that you cannot detach their meaning from the object they are assigned to?

The use of nomenclature to affect public opinion has long been used by political powers. Every single military operation had to be preceded by a discourse that “justified” colonization of other territories. A certain set of terms such as noble savages, heathens, wastelands, to name but a few, was used to delineate geography and represent people. This article is an invitation to question some terms the mainstream media has been using and to discuss the rationale behind using them.

Anti-Semitism is a term commonly used as a synonym for anti-Judaism and, by Zionists, as anti-Zionism. The term has been incessantly used by MSM and some political powers over the years to the point that it has become unquestionable. It is strange that the word Semite is now linked to Jews solely. According to Longman Dictionary, Semite is “someone who belongs to the race of people that includes Jews, Arabs, and in ancient times, Babylonians, Assyrians etc” (1295). While in Merriam Webster Dictionary, the word means a member “of peoples of ancient southwestern Asia including the Akkadians, Phoenicians, Hebrews, and Arabs” (MW). Thus, equating anti-Zionism with anti-Semitism deprives the aforementioned Semitic groups of their origins. More importantly, the term renders all anti-Zionists as racists. Ironically, many people get accused and labelled as anti-Semitic just because of opposing the atrocities the Israeli occupation forces commit on daily basis. Each time the term is used, it gains more momentum and becomes harder to question or expose.

Another term that is often unwittingly used by journalists and activists is Apartheid. Many people use the word to describe the suffering Palestinians go through as an analogy to the African experience. Apartheid was a segregation system that started in the 1940s in South Africa based on the so-called “white supremacy”.  The policy included residence, work, and marriage. In fact, depicting Israel and its policy as apartheid belittle Palestinians’ daily suffering. While the South African government worked on separating whites from non-whites, the Israeli government has been working on annihilating the Palestinian people and segregation is but only one of its many vicious practices. Moreover, Africans demanded equality whereas Palestinians are striving for liberation.

Using nomenclature by political powers to influence public opinion was manifested at its best in the Syrian crisis. The terminology assigned to describe the events in Syria is variant and vague, but it has been mainly about beautifying monsters and making the public accept the unacceptable. Moderate rebels were nothing but extremists, and one does not have to be well-versed in politics to know they are not moderate or even rebels. Princes were criminals beheading people based on religion and political affiliations. The jargon was carefully chosen to affect the public in Europe. Princes, Caliphates, and women slaves (Jihadi Brides) are epithets so alien from Syrian culture, but so attractive for some people in the West. This terminology is reminiscent and very similar to that found in One Thousand and One Nights (Arabian Nights), one of the most read books in 19th century England. To many people in the West, The Arabian Nights and ISIS are all about an exotic Orient, adventure and sexual liberty. The very language ISIS used was probably what enticed British teenagers to join the terrorist group. Little did they know that they would bring harm and destruction to themselves and other innocent people.

Language is not used randomly in politics. It is used to delineate topography and reshape history. Even though we cannot directly alter or control the language the mainstream media uses, we are definitely responsible for the way we interpret this language.

Shakespeare, William. The Tragedy of Romeo and Juliet. Simon & Schuster, 1992.