Despite the losses suffered by its mercenaries on the west coast, the leadership of the “International Coalition”, known by the MSM as the Saudi-led Coalition renewed its determination to continue the battle of Hodeidah to “achieve its objectives.”  This determination was met with the willpower of the Yemeni authorities in Sana’a to sustain the confrontation until the end, especially as the information from the ground implies the Yemeni army and the Forces of the Popular Committees have the upper hand so far.

The failure of the ground invasion led the UAE leadership to justify it on the pretext of concern for the lives of civilians, and the adoption of “calculated and gradual approach in the battle,” in the words of Minister of State Anwar Gargash.  Meanwhile, the UN envoy to Sanaa Martin Griffith left the capital, without extracting concessions the coalition had hoped for, such as an Ansarullah agreement to withdraw from Hodeidah.

Despite the continued failures of the coalition forces on the west coast, Anwar Gargash had no qualms about describing its status as “more than excellent.”  The UAE minister had no data to justify the status, but only to justify the setback facing his country’s militias by talking about an alleged concern to” protect civilians and continue the flow of humanitarian aid”.  In an attempt to cover-up the airport battle scandal, Gargash attributed the slow progress to “sniper fire,” claiming at the same time that the losing the airport battle was “calculated pressure” to “help the UN envoy persuade the Houthis to withdraw unconditionally from the city.”

Meanwhile, the spokesman of the Yemeni army and the popular committees, Brigadier General Sharaf Luqman, announced on Monday June 18 that the strikes of the joint Yemeni forces against the forces of invasion and occupation “continued according to the strategy of mobile defense and counter-attack set to contain such positions”, adding that “we have surrounded the enemy in the areas they reached so far “, and asserting that “it will be impossible for the enemy invasion to bypass the defensive lines”. General Luqman pointed out, in a statement to «Saba Net» Agency, “the Yemeni army and the popular committees imposed a new equation in the battle of the West Coast, and have shifted to offensive operations.”  General Luqman added that the number of enemy apparatuses destroyed during this battle was 44 via guided missile attacks over the past 10 days, including 19 of them in the West Coast.

In the attempt to defend Hodeidah from the Emirati-led invasion, a new air force entered the line of confrontation, which the Yemeni resistance used in targeting a convoy of armored vehicles and vehicles in the Al-Fayza area of the Tahita Directorate.  This led to “the death of a number of commanders of invaders and mercenaries,” Saba quoted a military source as saying.

However, this did not stop the Saudi-led coalition from launching air raids, which reached during the past few days, according to the Lebanese daily Al Akhbar newspaper, reached 250 raids but the coalition was still unable to take Hodeidah airport contrary to what major MSM outlets like The Independent reported.

The coalition fighters targeted on Monday, June 18 the headquarters of the military college and the university building of science and technology and inhabited houses, according to local Yemeni sources, killing 13 civilians and injuring 24 others, as well as new internal displacements cases away from areas located in the center of the city of Hodeidah. In addition, on Tuesday, June 19, Yemeni Al Massirah news channel reported that 6 Yemeni civilians were killed by the coalition airstrikes on Hodeidah, including 4 women in an air raid which targeted a bus to transport passengers near the area of Jawla.

Meanwhile, at the level of ground operations in Hodeidah, the army and the committees carried out on the morning of Monday June 18, military operations in several fronts east of Hays and south-west of Drehami, forcing the formations loyal to the «coalition» to retreat, after they were earlier able to sneak into the Grand Circle south of Hodeidah, forcing them to leave to South Drehami.

It was also reported that forces loyal to the Salvation Government erected concrete and dirt barriers along the road from the historic Corniche Fort through the fishing port to the Kilo 16 area to quell any attempts by the UAE-backed militias, who tried to circumvent the eastern side of the airport to advance towards the Kilo 16 area, which secures supply lines from the capital, Sanaa.

Ansarullah:  handing over the port of Hodeidah is non-negotiable

According to Ansarullah commander Mohammed al- Bukhaiti, “the coalition is covering up of their defeats in the West Coast and their retreat, to suggest that their non-occupation of Hodeidah is the result of negotiations and intervention by the United Nations.”  Al-Bukhaiti asserted that “there is no discussion about handing over the port of Hodeidah,” adding that “the UN envoy has proposed a plan to resolve the crisis in general, not just the issue of Hodeidah,” and that the discussions with the UN envoy are about monitoring the Port and not about handing it over.

Bukhaiti’s remarks came at a time when the UN envoy concluded his second visit to the capital Sana’a within a month after meeting with the head of the “rescue government” Abdul Aziz bin Habtoor and the head of the Supreme Political Council Mahdi al-Mashat without achieving any of the coalition’s desires of taking Hodeidah under military pressure and intimidation.

Meanwhile, Yemeni sources confirmed that the fighters of the Yemeni army and the Popular Committees are demanding through loudspeakers the remaining armed mercenaries besieged to surrender themselves because the enemy war jets have resided to bombing them after failing to rescue them or to open safe corridors for them to withdraw.  As per the map below published by the Yemeni military media, the Yemeni resistance was able to cut the lines of supply and logistical support to the enemy mercenaries from more than one junction breaking them into at least 3 groups each surrounded by three sides (grey color)  so that they have only the sea to escape. 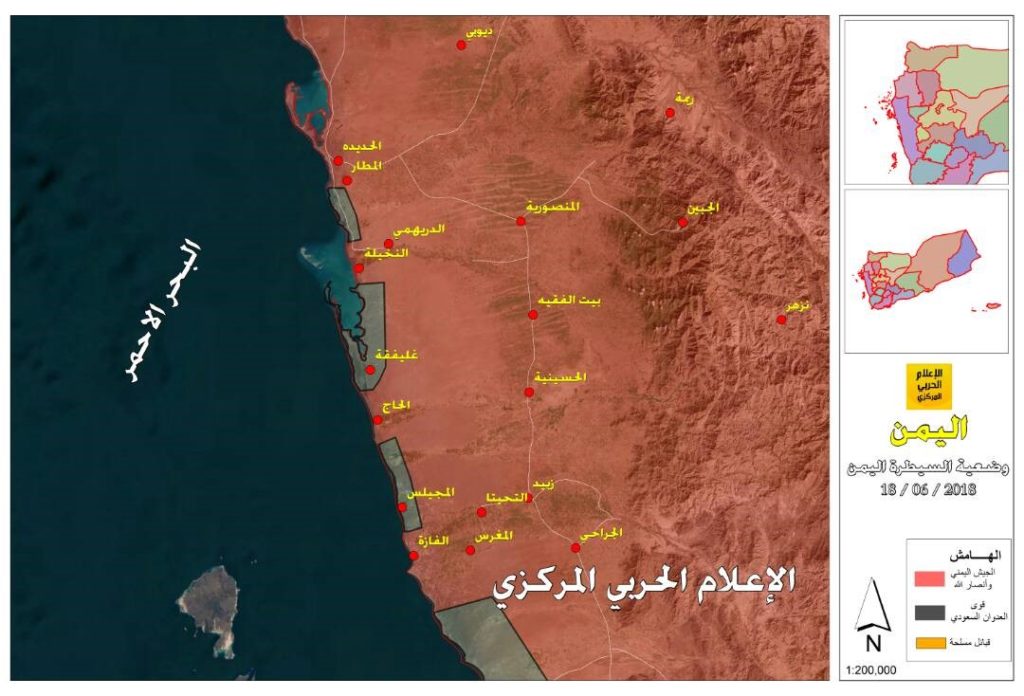 The fighting is still going on southern part of the Hodeidah airport under unprecedented heavy air raids, but the Yemeni resistance was so far able to break all the enemy attempts to take on the airport and inflicted them with heavy losses, where 8 armored vehicles were destroyed in the area of the Dawar alone. Meanwhile, in Drehami, the resistance fighters destroyed many armored vehicles and seized tens of them. 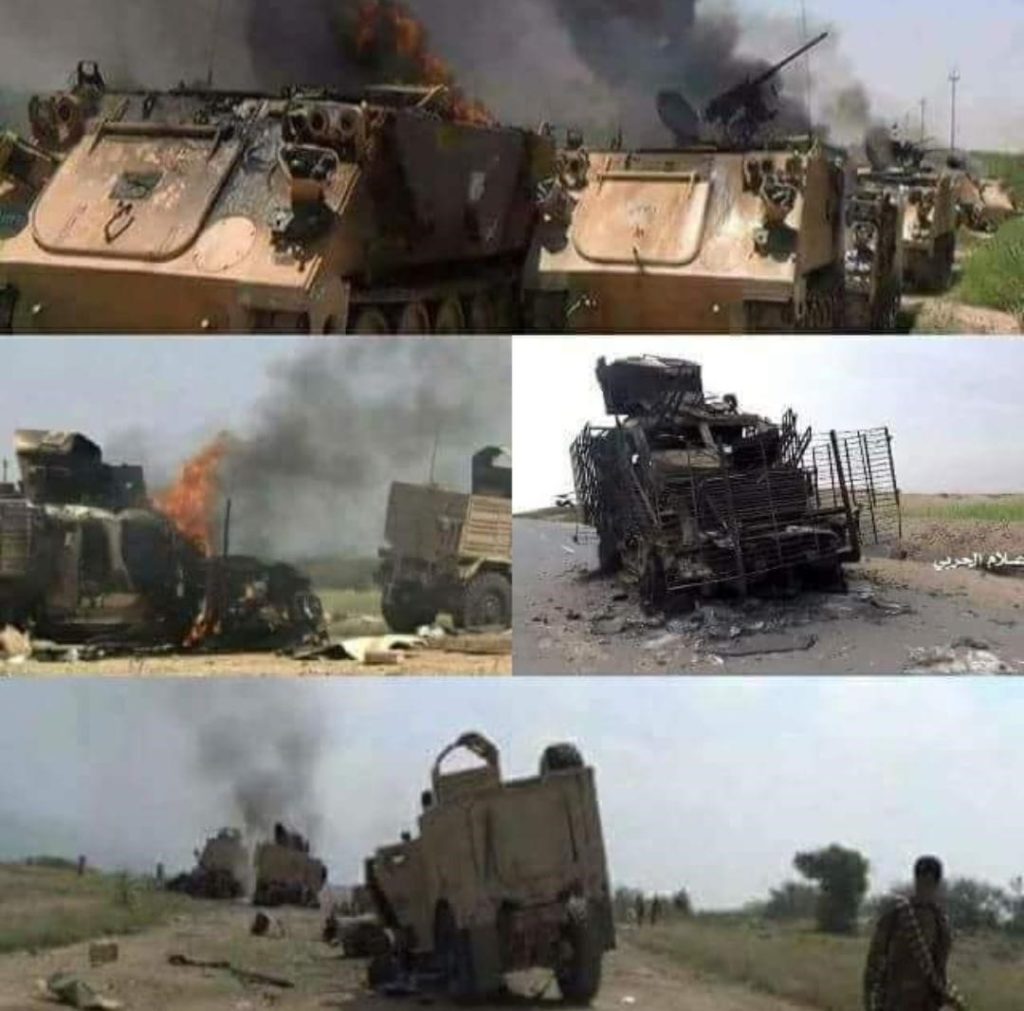 Hodeidah has proven so far that the crisis of the failed ground invasions of the coalition forces will not be saved by the lies of the MSM.  It has also proven that the forces of the Saudi-Emirati-US-French aggression submerged on the coast of Hodeidah of Yemen will not be saved by the loud but empty statements of some Emirati and Saudi ministers who are trying to escape the aggravation of their losses, which for sure won’t pass easily back in their countries.

A quadruple invasion, days of media storming and hysterical bombing did not change the legendary steadfastness of the Yemeni army and the committees, who cut through the invading forces on the west coast.  The Yemeni resistance hit back so hard that, as confirmed by the Western media, that French mercenaries and smugglers fell in the hands of the popular committees.  This fact pushed the invaders into a corner where they had to cry for international help represented by a UN envoy in the name of the humanitarian situation in Hodeidah after more than 3 years of constant humanitarian catastrophes in all of Yemen.  Perhaps it was the only peaceful way to remove the invaders from the hands of the Yemeni resistance and out of the military stupidity, in which they drowned themselves.