It struck me that while many Americans can regurgitate mainstream media talking points about Syria – talking points supporting an utterly false narrative about the war – few could pick it out on a map.

So here’s some basic info about where Syria is located and an overview of the country itself. I’ve done my best to crudely approximate where the U.S., Israel, and Turkey are occupying in Syria – all are in the country in violation of international law. Israel is demanding their illegal takeover of the Golan be recognized as a legitimate annexation. Not even the U.S. has recognized (to this point anyway) that they have any rights to that land. 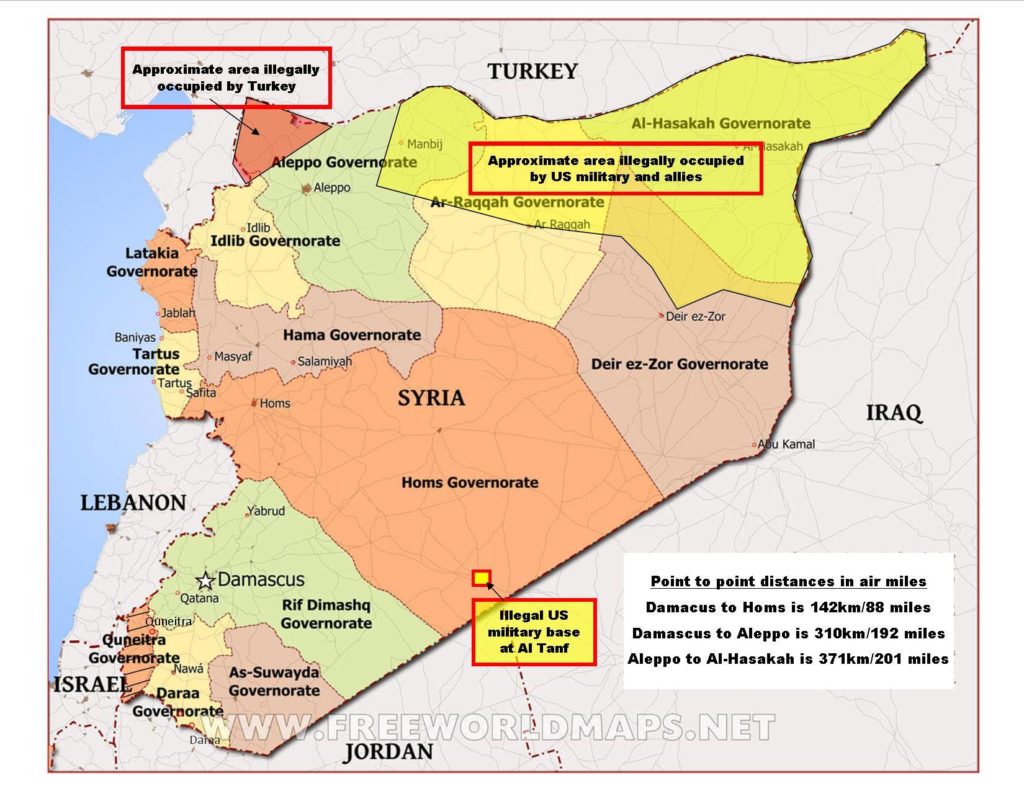 Map of the world showing the location of Syria relative to Washington DC (almost 6,000 miles) and Moscow, Russia (about 1,500 miles). Syria is part of the continent of Asia.

Map of Syria. Syria is divided into governorates (districts like states) with governors as the local authority. Each governorate has a capital which is the same name as that of the governorate. There is a Damascus governorate and Rif Dimashq governorate that are shown combined on this map.

The Quneitra governorate – the Golan Heights (in the lower left) is being illegally and militarily occupied by Israel. The city of Quneitra is in the formerly demilitarized United Nations Disengagement Observer Force Zone (between Syrian territory and the Israeli-occupied Golan Heights).

I’ve tried to approximate the northeastern area of Syria that the U.S. is illegally occupying with allied forces in the Hasakah, Raqqa, Aleppo and Deir Ezzor governorates. Also, there is an illegal U.S. military base at Al Tanf in the south. The U.S. is operating in Syria 100% illegally according to both U.S. and international law. Imagine a foreign power taking over all of America’s northwest states, building bases, attacking and killing U.S. armed forces, training a military force of tens of thousands and stealing its natural resources. And people here go apoplectic at the possibility that maybe Russia might have tried to influence our elections by buying some Facebook ads.

Russia and Iran are also in Syria but they do not occupy territory there with the exception of some Russian bases – and most importantly both are in Syria 100% LEGALLY and by invitation of the Syrian government.