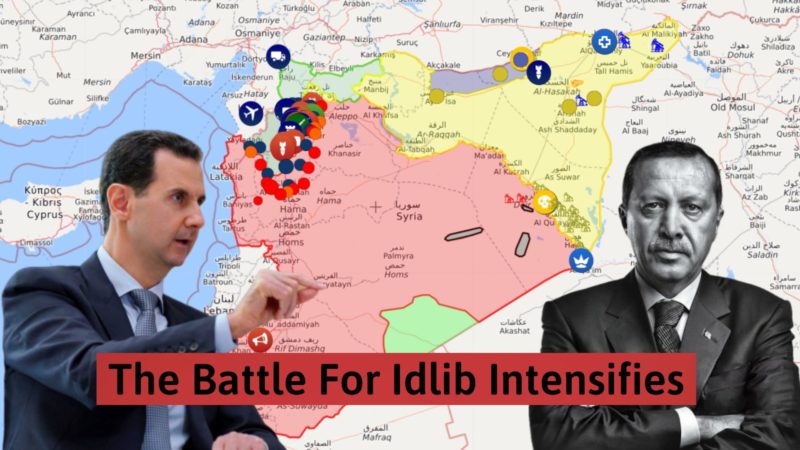 I’ve been talking about the strategy of the Syrian Army in the last couple of weeks and the intention of the SAA to capture the M5 highway. Now, the motorway that links between Aleppo and Damascus is completely liberated for the first time since 2012.

The M5 highway will need a few months to be in full service again because the SAA must secure at least 10 KM on both sides of the highway and to reconstruct the road after years of vandalism and destruction by the takfiri terrorists. However, this is great news for Syrians, especially for the people of Aleppo who were disconnected from the outside world since 2012 and unable to travel or do business freely.

Now, after liberating Icarda, the Syrian Army is trying to advance from Kafr Halab and Miznaz towards west and north-west, particularly to Ibbin and all the way to Dar Izza. If the SAA succeeds in capturing this area, the entire western periphery of Aleppo will be besieged and fall in a matter of time. That includes, of course, Kafr Hamra, Hreitan and Anadan.

Although the takfiri terrorists launched a big offensive on Nayrab under the fire cover of the Turkish occupation army, the SAA has not only repelled the attack but also trying to advance towards Qaminas, Najjarah and Sarmin. This advance is crucial for any future operation to recapture the city of Idlib.

Obviously, the Turkish side is unhappy for losing its proxy terrorist army in Syria. Therefore, Erdogan has sent hundreds of armoured vehicles, soldiers and ammunition to support Al-Qaeda affiliated terrorists. However, the Syrian Army backed by the Russian forces didn’t hesitate to bomb a few Turkish posts and at least 14 soldiers were killed and 41 wounded. The targeted posts included Taftanaz airbase, which is a training camp for Uzbek and Uyghur terrorists. The airport is not part of the Sochi agreement. So, what do Turkish occupation soldiers do with internationally designated terrorists?

The escalation followed by marathonian negotiations between Moscow and Ankara, but they weren’t fruitful. So, Erdogan made some bold statements today saying that:

Turkey is determined to push the Syrian forces behind Turkish observation posts in Idlib by the end of February. To this end, Turkey will take all necessary steps, including the use of land and air means and will strike the Syrian army, even in areas not covered by the Sochi Agreement, if it attacks Turkish forces. Erdogan added that no one will be safe in a place where the Turkish soldiers’ blood has been wasted and the aircrafts bombing civilians in Idlib will not be able to fly as freely as before.

On the other hand, an official source at the Syrian Ministry of Foreign Affairs said that Syria categorically rejects any Turkish presence on the Syrian territories that constitutes a flagrant violation of international law and a blatant attack on Syrian sovereignty and contradicts the Astana and Sochi understandings regarding the de-escalation zone in Idlib, which confirms Erdogan’s regime’s insistence on disrespecting any pledges and continue acting outside the law.

The source added that the attacks of the Turkish regime will not succeed in reviving the terrorist organizations, and the Syrian Army will continue to hunt the remnants of these organizations until they are completely eliminated and to regain control of all Syrian lands.

Now, in your opinion, do you think Erdogan will launch a massive attack on the Syrian Army in Idlib? And if Erdogan was bloodthirsty enough to do so, what would be the reaction of the Russian army that is accompanying the Syrian army in Idlib?