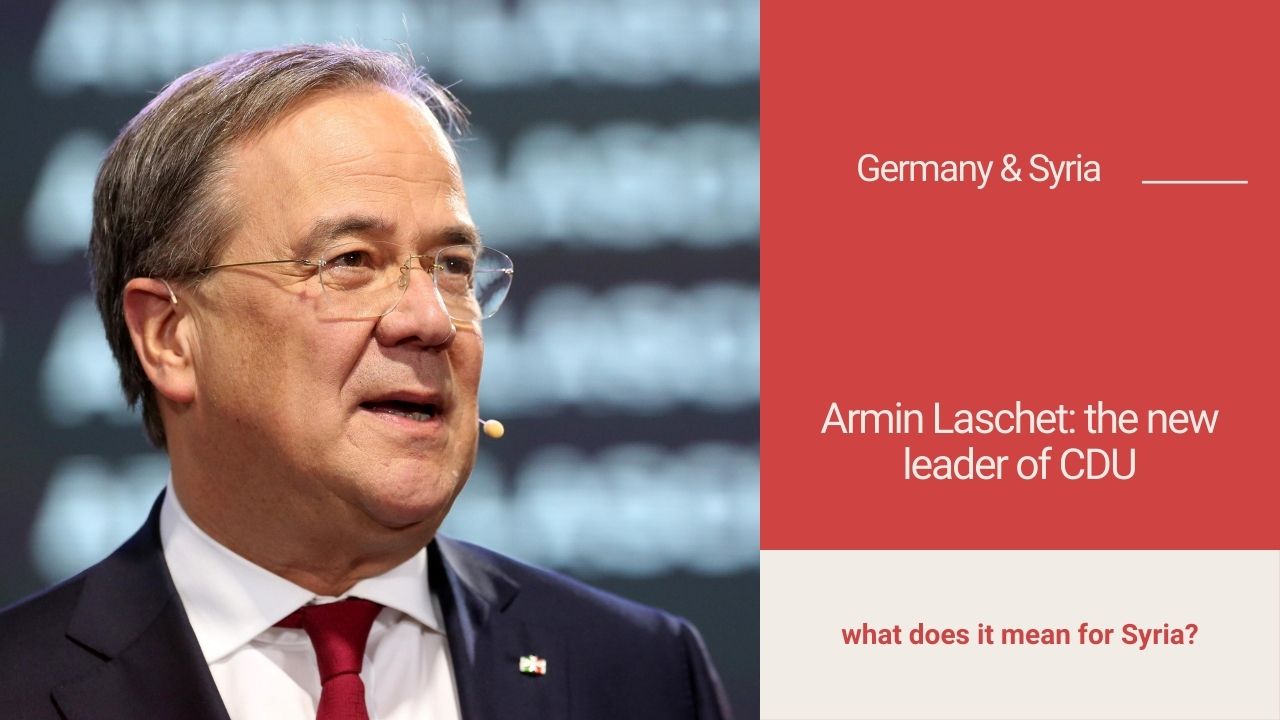 Armin Laschet, state premier of North Rhine-Westphalia, was elected as the new Christian Democratic Union (CDU) leader last week. Laschet’s victory puts him in pole position to succeed Ms Merkel as chancellor of Europe’s most powerful economy after September elections to the Bundestag.
But what more do we know about him?

Laschet has always been a faithful ally to current Chancellor Angela Merkel and has spoken of continuing her centrist approach to politics. He has said he stands for I quote: “a level-headed approach and avoiding extremes,” as well as moving towards societal cohesion and the social market economy.
Mr Friedrich Merz, a former leader of the CDU parliamentary group who was backed by those who want the party to tilt to the right, argued that the party had drifted too far to the centre of German politics under Merkel and wanted to turn it into a more identifiable conservative party, able to win back right-wing voters who had defected to the Alternative for Germany (AfD) or stopped voting altogether.
However, Laschet has consistently defended Merkel’s policies, including her decision to keep Germany’s borders open during the European refugee crisis in 2015 and so allow more than one million migrants into Germany.
Therefore, his win marks a triumph for the liberals and centrists in the CDU, who want it to continue the middle-of-the-road policies pursued by Merkel during her 16 years as chancellor.
Laschet formed an alliance with 40-year-old German Health Minister Jens Spahn in late February 2019 and a few days before the vote to decide the next CDU leader, they both published a 10-point programme called “Impulse 2021.”
The programme affirms a “clear boundary on the right” and the broad positioning of the CDU as a mainstream Volkspartei or people’s party with a somewhat left-leaning workers’ wing and an economic wing that tends to be more conservative.
The duo also said that they wanted to “make the 2020s a decade of modernisation for Germany” and will work towards economic dynamism, comprehensive security as well as top educational opportunities. They also spoke of establishing a digital ministry at a federal level, avoiding new burdens on the economy and a crackdown on crime and extremism.
When it comes to foreign policy, Laschet has shown a clear focus on the European Union as well as building on its transatlantic relationships, indicating his intention to cooperate more with the US on climate and trade policy.
As he has called it a “victory for democracy”, the change in leadership in the US will suit Laschet. He has also long maintained close contact with the political leadership in Paris and often visits the French capital. He has been Germany’s representative for Franco-German cultural relations for the last two years.
But what about Syria? Will Laschet have a different approach than Merkel who positioned herself in the anti-Assad camp?
In August 2014, as ISIS was expanding in Syria and Iraq, the former foreign minister of the US, John Kerry tweeted saying ISIS must be destroyed. Laschet confronted Kerry on Twitter, reminding him that the US supported ISIS and Al-Nusra against President Assad and that Qatar and Saudi Arabia funded these terrorist organizations.
Although some pundits claim that this is a conspiracy theory, recent Senate investigation found that Obama administration knowingly funded al-Qaeda affiliate in Syria, as non-profit humanitarian agency World Vision United States improperly transacted with the Islamic Relief Agency in 2014 with approval from the Obama administration, sending government funds to an organization that had been sanctioned over its ties to terrorism.
Not only that, WikiLeaks released audio from a September 2016 meeting in which John Kerry admitted to allowing the growth of ISIS. Take a listen:

While Laschet called in 2014 for cooperation with Assad to defeat ISIS, he faced a backlash by anti-Assad enthusiasts, accusing the Syrian president of killing tens of thousands of people. But Laschet told his critics that these are the victims of a terrible war and many of them were killed by Al-Nusra and the rebels.
I’m truly surprised by Laschet’s statements on Syria and I wonder if he still holds the same opinion regarding Syria, because in my opinion, Germany is able to play a constructive role in the war-torn country and help the Syrians in restoring peace, stability and reconstruction.
But the question remains, will the Biden administration who is promising further engagement in Syria and elsewhere, let Laschet pursue an independent constructive foreign policy towards Syria and the middle east in general?
The meltdown of pro-war journos and activists on Twitter might indicate that Laschet may take a different approach than her predecessor but history taught us to wait and monitor the actions, instead of listening to statements, because everything changes when a politician becomes in a position of power, especially a country like Germany which has security and intelligence commitments with NATO. But in your opinion, will Laschet cooperate with Syria and lift the inhuman sanction on the country?

Who is Armin Laschet, the newly elected leader of the CDU? https://bit.ly/2XRM4fZ

Who is the new head of Germany’s conservative CDU party? https://bit.ly/3sDMmVR