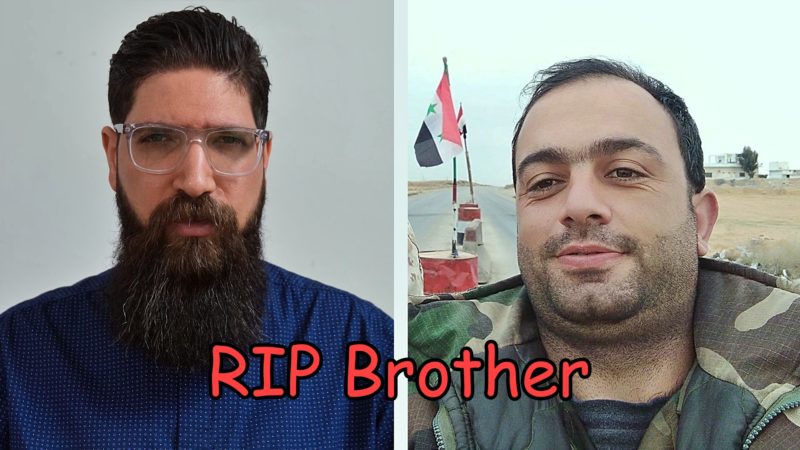 When Armenian elderlies used to tell me the horrific stories of the Armenian genocide, I found it hard to believe that Ottoman soldiers used to compete who is going to collect more ears, fingers or nipples from their Armenian victims.

Now, in the twenty-first century, the terrorist army of Erdogan is committing the same crimes in Idlib, but this time, the so-called civilized world, also known as NATO and the EU are not only watching the horrors but also supporting the terrorists. Yesterday, Erdogan’s army shot down a Syrian fighter jet over Idlib while it was on a mission of fighting Al-Qaeda terrorists. Erdogan’s proxy terrorist army on the ground captured one of the pilots and slaughtered him into pieced with a knife. You are not going to see these horrific scenes on your TV channels, instead, they will tell you that Assad and Putin are bombing hospitals and cat sanctuaries.
Yesterday, on 3 March 2020, the terrorist army of Erdogan also killed my friend Hasan Hasan. I lost many friends during this unjust war but Hasan broke my heart because he was a gentleman who loved Syria to the bone and he dedicated his early life to protect Syria and fight against the terrorists. When I used to tell him that I feel ashamed in front of the sacrifices of the Syrian soldiers, he used to tell me that I’m also a soldier on different battlefield, intellectual and media battlefields and that I’m protecting their back by showing the full truth to the world.
At the beginning of the war in 2011, Hasan was a university student in Latakia, he decided to join the army in early 2012 to defend the country. He served in the infantry college of Aleppo and defended the college for 4 months against Al-Nusra and other terrorist organization. He was besieged with his colleagues for 12 days in the college until it was impossible to withstand.
Therefore, they withdrew to Aleppo central prison only to be besieged there for more than one year. The terrorists attacked the prison from all sides using car bombs, suicide attacks, rockets, missiles, snipes, and they prevented food and medicine to hundreds of prisoners and soldiers in the prison. 600 people died during the siege, but Hasan and a few other soldiers and prisoners survived when General Suheil Hasan who leads the Tiger Forces broke the siege on the prison.
When Hasan arrived at the hospital in Tartous and saw tens of thousands of people gathering to welcome them for their safe return, he felt stronger and returned to the army to fight in the suburbs of Aleppo until the city’s full liberation a few weeks ago.
Recently, Hasan had a new role in fighting terrorism, this time in Idlib. Hasan fought against Al-Qaeda and the Turkish occupation army and martyred yesterday, the third of March 2020 in Saraqeb. I will never forget this heroic character who thought us all a lesson: to love your nation is not only rhetoric we use in a conversation. To love your nation means to sacrifice yourself so that others live in peace.