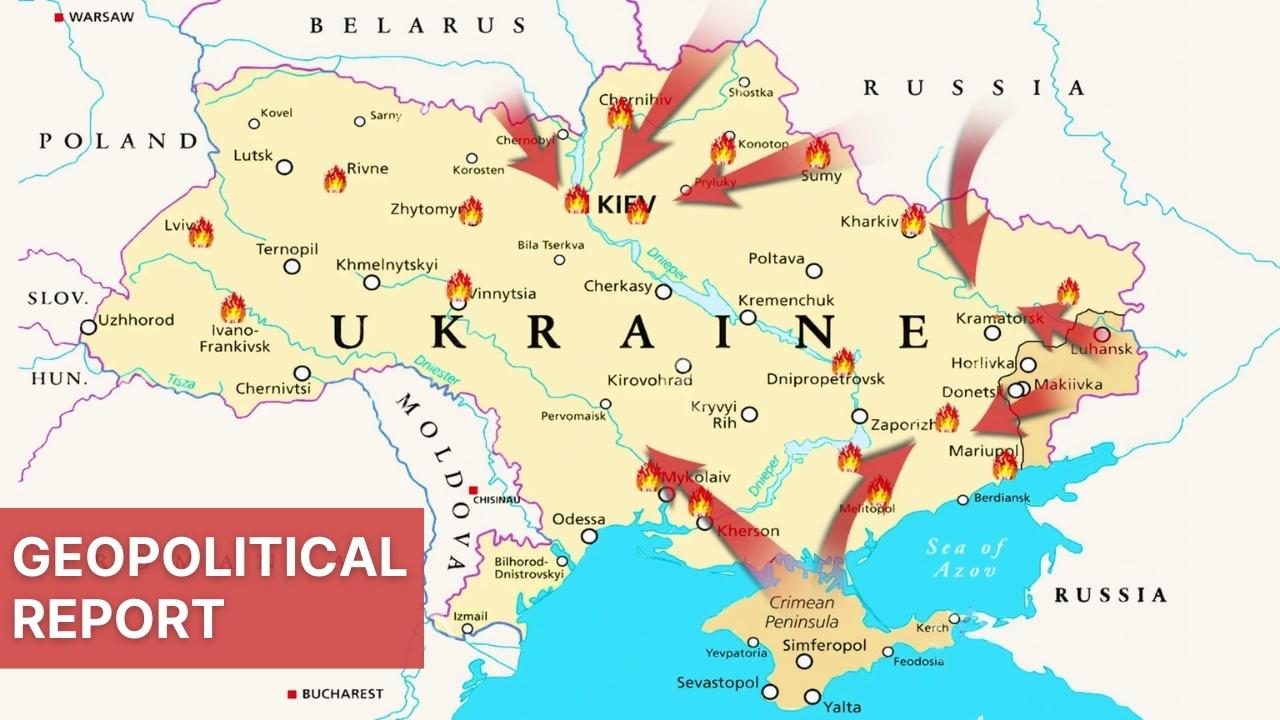 30 days after the Russian offensive in Ukraine, it is possible to draw conclusions, give assessments and draw lessons, based on the facts on the ground, away from the propaganda of the parties involved in the conflict. Kevork Almassian elaborates on the military developments in Ukraine.

From our perspective, it seems that the Russian military campaign in Ukraine has a few dimensions:

According to the map of control, around 70% of the Donbas region is secured by the Russian forces. The main battlefield is still going on in the Azov stronghold of Mariupol. However, in military science, the fall of Mariupol is a matter of time, maybe a few days because the city is besieged from land and sea and it has become an “island” in military terms. This means, no reinforcement can come to Azov. We estimate the fall of Mariupol in 2 weeks which will have a similar impact to the liberation of Aleppo if we have to compare it with Syria.

In order to ease the military pressure on the Russian forces, the latter is bombing Kharkiv in the north which is another Azov headquarter. Up until this moment, the Russian forces did not launch a serious ground offensive on Kharkiv but rather artillery and aerial bombing. The main reason for this is to disperse the Ukrainian forces and block any attempt of re-grouping and counter-attack on Mariupol and other regions in Donbas.

From a military perspective, if the Russian forces want to secure the Donbas region from future attacks, they have to neutralize Kharkiv and Mariupol from the neo-nazi groups. The Russian forces will face armed resistance but the location of Kharkiv near the borders with Russia allows the latter to send reinforcement and win the battle. We believe Russia can occupy Kharkiv after the occupation of Mariupol.

In the south, the Russian forces occupy 80% of the coastal line till Kherson. The next step is Mykolaiv and then Odesa. The goal is to turn Ukraine into inland and hence block Ukraine’s access to international waters through Azov and Black seas. The mission of the Russian forces here is very difficult and it may take a few months to seal the sea.

In the north, the Russian forces are advancing from two directions to Kyiv, from the East and the North. Up until this moment, there has been no serious attempt to capture Kyiv and it doesn’t seem the capital is a priority for Russia now, but it will be in the near future when the Russian forces cut the lines of reinforcement and block the seas. This is about priorities and geopolitics. We think the goal is to besiege Kyiv and force Zelensky to surrender without intra-city fighting, although we don’t really know if Zelensky is really in Kyiv or not.

The Scenario of a Chemical/Biological Attack

There is a scary scenario that may change everything which is the biological or chemical attacks. The Syrian experience tells us that the Brits and Americans are capable of waging false-flag chemical attacks or fabricating one or even falsifying the investigation of the OPCW. If a chemical attack happens, whether true or fabricated, we should know the only benefactor will be the US and the UK, as they will push the European countries to increase their military engagement in Ukraine and even call for NATO intervention. This scenario means WW3 and the biggest loser from it will be Europe.

We think the biggest benefactor of the Ukraine war so far is the American industrial complex as US arms manufacturers are generating tens of billions of profits, whereas the European markets are hit with economic and fuel crises with no solution in the sight. On a security level, flowing weapons to Ukraine may bring instability in Western Europe as the radical elements who enjoy a military experience in Ukraine may escape and take refuge in other European countries. If the Islamist militants in Syria who were armed and trained by the CIA have attempted multiple times to shoot down civilian planes, can you imagine what the neo-Nazis in Ukraine can do with all the Javelins and Stingers if they feel losing?