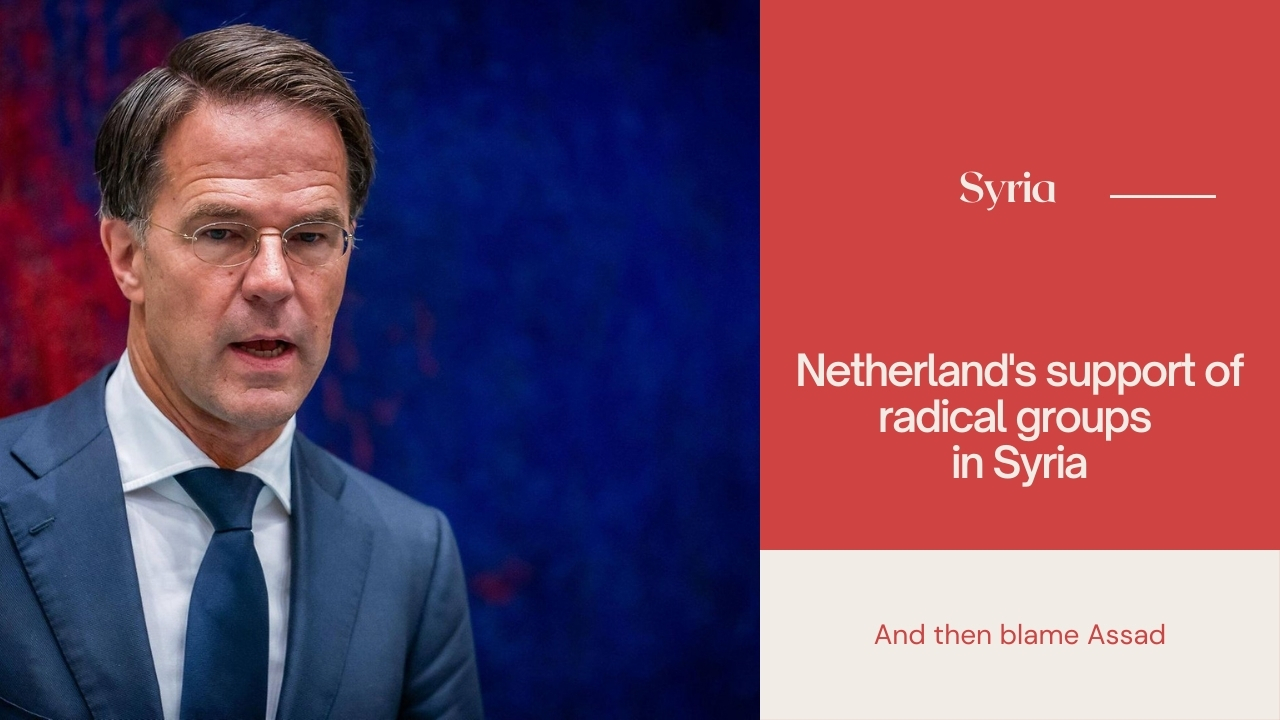 We usually address some of the western governments support to radical jihadists in Syria but at no time we have imagined that the Netherlands would provide support to hardcore jihadists.

After years of covert support to the terrorists which amounted to 80 million euros, the Netherlands has stopped funding the jihadists, Dutch foreign minister Stef Blok have told MPs in a briefing in September 2018.

However, the reason for halting the support to the radicals whose colleagues in Europe who share the same ideology are slaughtering European civilians, is not because these terrorists are dangerous by any means or because they killed hundreds of thousands of Syrians, but rather because the chance that the terrorists will be able to win the war against Assad is now ‘extremely limited’ and has ‘not had the desired effects’ according to the Dutch minister.

In addition to funding the jihadists, the Netherland had also put money into the police forces of radical Islamists and to the White Helmets, better known as the propaganda wing of Al-Qaeda in Syria.

This report came amid an investigation released in September 2018 by two major Dutch news outlets. The papers revealed that at least one militant group receiving Dutch funding had been labelled a terrorist organization by their own justice department.

And this came after a Dutch man is being prosecuted in Rotterdam for joining Jabhat al-Shamiya in 2015, a group that has received assistance from the Dutch government.

The investigation also showed that the Netherlands supplied Toyota Hilux and Isuzu Dmax pickup trucks, uniforms, satellite telephones, laptops, mattresses, backpacks and cameras to the jihadi groups. The militants themselves told the Dutch media that they are very satisfied with the Dutch aid and that they are using the Dutch goods in the armed struggle against Assad.

Up until now, Dutch Foreign Affairs always claimed that the Netherlands only supported “moderate groups” in Syria and that these groups are subject to strict criteria and they allegedly respect “humanitarian law of war”, do not cooperate with extremists, and pursue an “inclusive political solution” for Syria. But the reality on the ground is, the Dutch government-supported hardcore jihadists who won’t hesitate to slaughter the Dutch people.

Are you surprised? Because I am not, and it is worse than you think. As on 27 of November 2020, Dutch Prime Minister Mark Rutte has personally tried to stop an investigation into Dutch support for the terrorists.

Now, the Foreign Minister Stef Blok says an investigation will lead to “big problems” because “a lot of the information is confidential”. Blok also claims that such an investigation would also create “tensions” among “allies” involved in the aid program and „They will react uncomfortably when they are also questioned along the Dutch route,”.

Now, instead of holding the officials responsible for tunnelling aid to radical terrorists in Syria, the Netherlands is preparing a case against Syria at the U.N.’s highest court, seeking to hold the government of President Bashar al-Assad accountable for human rights violations, including the use of chemical weapons.

It is worth to mention that western governments rely on testimonies of NGOs funded by them, in a bid to accuse the Syrian government of launching chemical attacks. And recently, whistleblowers in the OPCW and experts who were in the Fact-Finding Mission of OPCW revealed the manipulation of facts and changing the content of the reports they prepared by the administration of the international organization, which eventually leads to the conclusion that the Syrian government’s has nothing to do in the chemical incidents and the Douma chemical incident was a big hoax.

Non-lethal Assistance and the Syrian Conflict: Lessons from the Netherlands https://bit.ly/39yHJoR