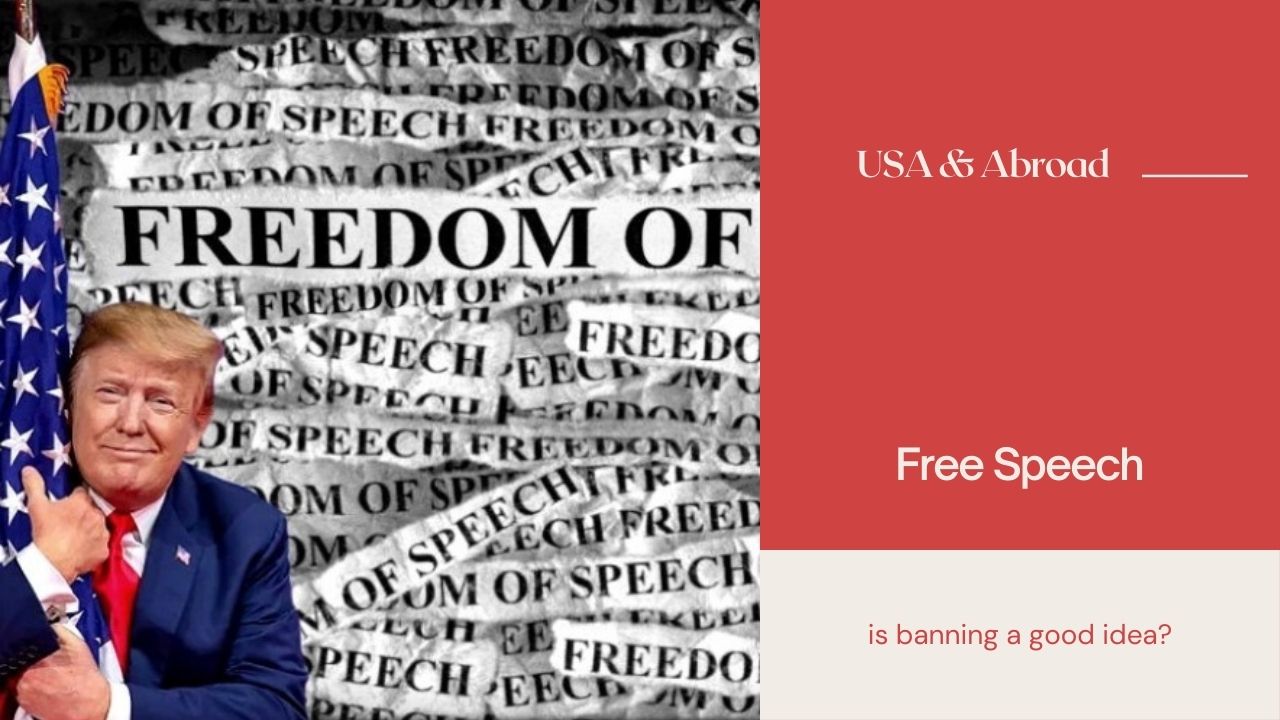 Freedom of speech is a principle that supports the freedom of an individual or a community to articulate their opinions and ideas without fear of retaliation, censorship, or legal sanction.

The term “freedom of expression” is sometimes used synonymously but includes any act of seeking, receiving, and imparting information or ideas, regardless of the medium used.

Freedom of expression is recognized as a human right under article 19 of the Universal Declaration of Human Rights and recognized in international human rights law in the International Covenant on Civil and Political Rights.

However, Freedom of speech and expression may not be recognized as being absolute, and common limitations or boundaries to freedom of speech could be imposed such libel, slander, obscenity, pornography, sedition, incitement, fighting words, classified information, copyright violation, trade secrets, food labelling, non-disclosure agreements, the right to privacy, dignity, the right to be forgotten, public security, and perjury.

I made this introduction as a prelude to the great purge that we are witnessing nowadays by giant tech companies against Trump and his supporters, under the pretext that Trump has incited a coup against the government.

We can argue whether or not Trump incited for violence and domestic terrorism as the democrats are claiming, but what really strikes me is the endorsement of western so-called liberals of censorship by parroting what the CNN and MSNBC say that these giant techs are private companies and therefore they have the right to silence anyone they want.

The problem with this argument is that we are giving unlimited power to the giant tech companies and Silicon Valley over our ability to speak freely and the extent in which we can deliver our message.

For example, Facebook, Twitter and YouTube are the biggest social media platforms today and our ability to deliver a video or a tweet or an analysis depends on the amount of people on the platform.

For instance, on YouTube, I was able to reach to over 7.5 million people across the world. If one day, YouTube decides that my opinion is no more welcomed or interprets it as dangerous, as it has done before with many YouTubers and activists, then the chances to restart my business will be very low, because the closest competitor to these big tech companies are nowhere near their size.

Some may say, this purge is only meant for Trump and his supporters, but this is unfortunately not true, as Facebook, for example, blocked this week Ron Paul’s page without giving any explanation other than “repeatedly going against our community standards,” which are elastic criteria that can be interpreted according to the mood of the employee observing the posts.

Similarly, Facebook deleted this week the Iranian Press TV’s main page without any warning or explanation.

These banning cannot be underestimated, as the big techs created monopolistic platforms where they can ban, silence, and even remove entire platforms, especially their competitors from the internet, as it happened with Parler.

I usually do not agree with Chancellor Merkel in lots of things, but I loved her statement when she said banning Trump is problematic and her chief spokesman told the reporters that “The right to freedom of opinion is of fundamental importance,”

In addition to the German Chancellor, the Mexican President and two French ministers were against the banning and the Frenchmen said they were shocked and disturbed by the spate of Silicon Valley censorship, including against Trump, calling tech giants “the digital oligarchy” and a “threat to democracy.”

Given both Merkel and López Obrador are denouncing the recent Silicon Valley censorship, are the so-called liberals in the US going to call them white supremacists or any other names for those who question the union of tech monopolies and neoliberals?

Look, I am not white, so you cannot call me a white supremacist, maybe you need to find a different smear word.

The other day, I searched on Twitter: “coup words matter”, and after reading tens of tweets belonging to Americans blaming Trump of a coup, I smiled because these poor boys and girls have never seen what a coup mean and how the CIA literally destroyed the lives of millions of people with coups.

What happened in Capitol Hill is a joke comparing to the coups instigated by the CIA, who relies on the most dictatorial and terroristic forces to install puppet governments, or simply create mayhem, hence an opportunity for direct intervention under the pretext of fighting terrorism.

In my opinion, the real reason behind the purge against free speech is that, as Russia and China are increasingly challenging the U.S. and preserving control over the narratives that their people need to know, free speech has become too disturbing for the U.S. empire to keep the competition in its favour.

The deep state in the U.S. wants to make sure that no more disturbances, such as the Trump phenomenon, is repeated in the foreseeable future.

Despite the obvious, I am still seeing some activists on Twitter saying that if Twitter and Facebook are banning accounts then create your own app. But when competitors created their own apps, Google and Apple stores banned them too. Now what? has someone to create a new internet?

Do you understand that the owners of these big tech companies are not your friends? They are not your allies?

These people are running after power and money. They are greedy, vile and brutal, and by giving them excuses, you are only paving the way for them to have complete monopoly over every aspect of our lives.

Make no mistake, these companies perceive you like an insect or maximum a number in their algorithms, seeking to make financial profits from your activity on their platforms.

If today, the owners of these tech companies see in neoliberalism as a mean to increase their wealth and power, tomorrow they may find their weapon in a different ideology, and then you, who is celebrating the banning of your opponents, will be the new victim.

How Silicon Valley, in a Show of Monopolistic Force, Destroyed Parler https://bit.ly/39vqh2Z

Facebook Says It Is Deleting Accounts at the Direction of the U.S. and Israeli Governments https://bit.ly/2N4vZ4p

How To Handle Dangerous Speech Without Resorting To Censorship https://bit.ly/3oPRFPS