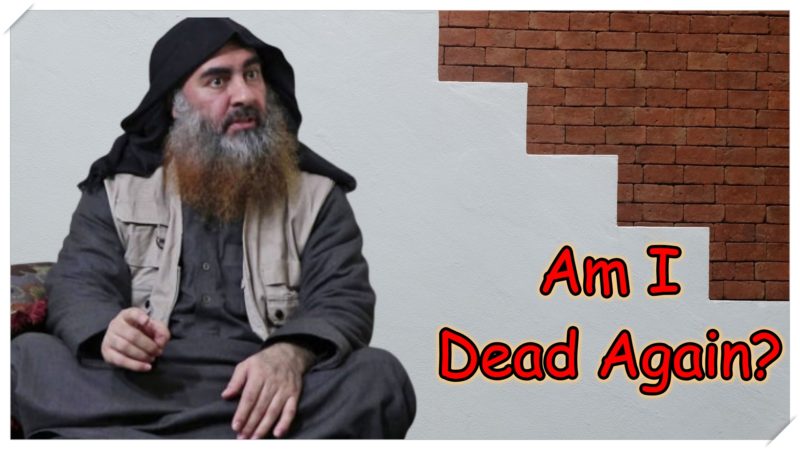 I don’t know how many times the leader of ISIS declared dead but here we go again, the United States says American special forces killed Baghdadi in Idlib and they buried him by throwing his dead body in the ocean. No joke.

However, let’s address the timing of the declaration, it comes at a crucial period when the US President Donald Trump declared the partial withdrawal from Syria, for the exception of the oil and gas fields. I mean, of course, American soldiers serve for oil and die for oil. I am not saying the US needs that oil for consumption but if we really understand the business mindset of Trump, I think we could come to a conclusion that Trump wants to finance the US presence in Syria through selling the Syrian oil and also depriving Syria of the revenues of its own oil. So Trump is hitting two birds with one stone. And let’s not forget the Israeli role in this regards, Tel Aviv has good relations with the Kurdish militias and it also wants to keep Syria in a weaker position.
The alleged death of Baghdadi in this particular time by the US also indicates that Trump wants to achieve internal goals: for example, Trump will now say: look we killed Baghdadi and we don’t have to keep big forces in Syria, let others deal with the problem and secondly he wants to score political points before the upcoming elections in November 2020.
Do you remember when Obama declared the death of Usama bin Laden? it was 1 year before the elections of 2012 and now Trump is copying his predecessor.
There is another point of vital importance, which is how did Baghdadi reach to Idlib? Unfortunately, we don’t know the right answer. But we know for sure that Idlib is under the control of Turkish backed terrorists. In this regard, Syrian reports indicate that Baghdadi could have been protected by the Horas el-Din or the Guardian of the Religion group, whose relationship is tense with Al-Nusra Front. This argument makes sense because Al-Nusra and ISIS are not in good terms and The Guardian of the religion is more friendly to ISIS.
In all cases, whether Baghdadi is dead or he is living somewhere in Hawaii, it doesn’t really matter. What truly matters is the prevention of reemergence of ISIS under new leadership or a new brand. Because the majority of hardcore leaders of ISIS are still in the prisons of the Kurdish militias and the later is blackmailing the Americans and using this card to practice pressure on the US to stay in Syria, saying: if you leave we won’t be able to guard the prisons any more.
Additionally, a significant number of children between the ages of 14 and 18, who were indoctrinated by ISIS, live in camps in the eastern shores of the Euphrates. Their home countries, especially Europe refuse to take them back. These children could turn to fighters soon if the problem isn’t solved between the regional and global players.
Now, what do you think about the death of Baghdadi?
Do you think his alleged death will help the reelection of Trump?