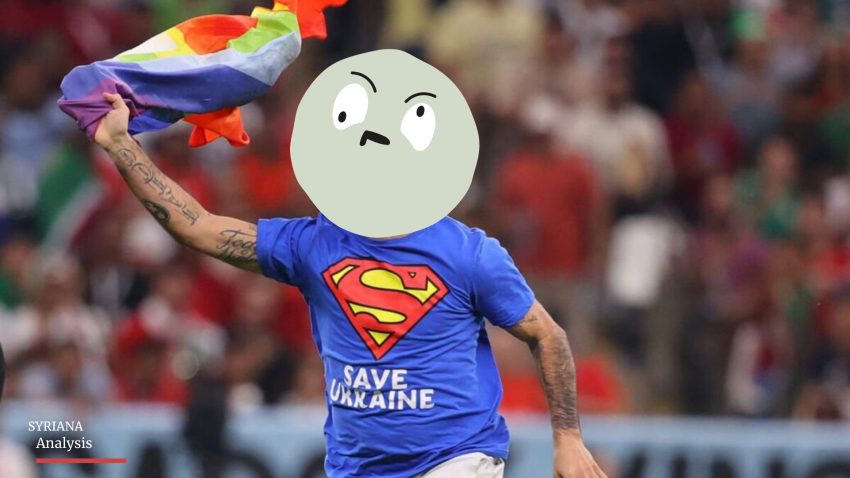 A pitch invader brought a rainbow flag onto the pitch at the Qatar World Cup match between Portugal and Uruguay at the football stadium. The invader also wore a t-shirt with a superman logo and the message: “Save Ukraine”.

The back of the t-shirt had the message: “Respect for Iranian Women”, with three security guards manhandling the invader and removing him from the pitch within seconds of entering the field of play.

This man’s t-shirt indicates that he supports Ukraine, Iranian women and the LGBTQ community.

The problem is, he wants us to see and hear his opinion even if we don’t want to see him during a football match. He wants to impose his problems on us and make us feel that he came to our region to teach us the values of freedom and democracy.

Most importantly, this person wants to put us in a position where if we speak out against what he did, he will say that we are from a backward and reactionary country and that he is here to teach us the correct values.

Look, I am against any war in the world because I tasted the bitterness of the war in Syria, and I do not wish anyone to go through the same experience, but you did not speak and you didn’t begin to panic until the war became close to your country, even though your country supported the wars in our country with money and weapons.

I am with all the women of the world in their endless struggles. Our women are our mothers, sisters and daughters, and I do not think that you fear and care for them more than we do.

I am with all freedoms, but they must be the result of historical accumulation and development in our society and not because you recognized a right of a certain group and you want to come today and force us to recognize these rights.

I will recognize and support these rights when the conditions in our countries are ripe and things are developing on their natural track, and not because you raised a certain flag in our countries in a way that can be said to be the least arrogant.

My current cause is to completely liberate Syria, lift the deadly sanctions and repel the repeated aggressions of the Israeli army on my country in a manner that violates international law, but this matter did not provoke you and did not make you feel that you have to write on your shirt the name of Syria or the name of any country suffering from American occupation or its deadly sanctions on the people.

These sanctions are imposed on the people of the south that you want to liberate and teach them their priorities. The people in Syria are without electricity, heating and medical care because your country is imposing a blockade and sanctions. Didn’t this provoke you?

Didn’t it provoke you the fact that your country, in its colonial era, stole and is still stealing the countries of the south that you want to educate and persuade with issues and problems that entertain you in your spare time?

Do you know the policies of your country in the past and present? Do you know what your country did in Africa, for example? Did France, Belgium, England, Portugal and Italy apologize for their black past and compensate for it?

My problem with you is that you want to impose your problems on me, while you consider my problems at best a support for terrorism or a stupid, superficial and absurd issue.

I know that we have many difficult and harsh problems that need great effort, but you are definitely not the one to teach us how to solve our problems.

It is not okay for anyone to make us feel that they are better and more informed than us. We lived in conditions that even your dogs do not accept living in. Your country’s policies and your silence about them are a big part of our problems.

Therefore, before you teach us about our problems and how to solve them, listen to our problems. Of course, you will not do that because you do not care. What you only care about are the issues that you indulge in your free time, then come to our countries and deal with us arrogantly.

And with all my respect for your country, its laws, and its development, part of the lack of development in our country and its problems is your country’s meddling and unwillingness to let us advance and develop.

In the previous video, I hosted the UN Special Rapporteur on the negative impact of unilateral coercive measures on the enjoyment of human rights, Dr. Alena Douhan.

She visited Syria between October and November and published her initial report on the devastating effects of the sanctions on ordinary citizens.

Dr. Douhan is now subjected to online criticism and accusations because she said what has to be said: sanctions are slowly killing the Syrian people and the allegations of the US and the EU that their measures do not target the livelihood of the Syrians are incorrect.

Dr. Douhan is especially criticized by the online mob because she appeared with me on Syriana Analysis. So, I kindly ask you to go to the previous video, watch it and share it on your social media platforms and with your friends to publicize this important issue and show the mob that we are not few and our voices must be heard.