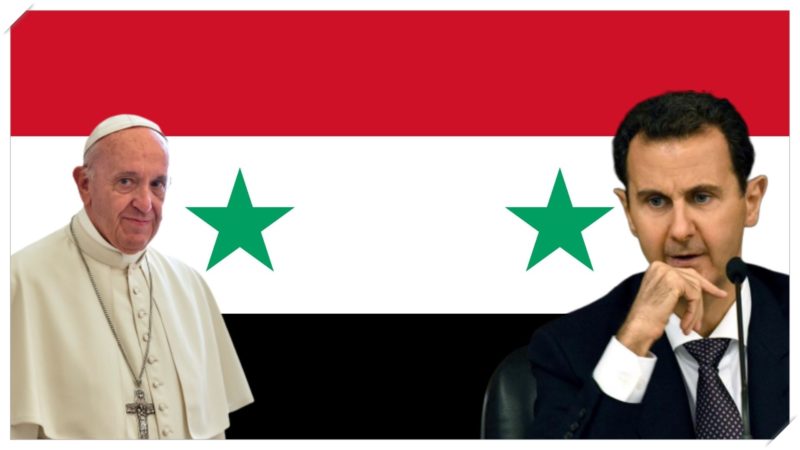 The Syrian Presidency Facebook page posted saying: Pope Francis reiterated his support for restoring stability in Syria and ending the suffering of the Syrian people as a result of the war and its aftermath.

On the other hand, President Assad talked about the crimes and attacks committed by the terrorists against civilians from the areas where they are still stationed, especially in Idlib, and the support that continues to reach the terrorist organizations from some regional and western countries in order to continue their crimes.

However, the Vatican News website has reported something different, claiming that the Pope asked Assad for the protection of civilian life, an end to the humanitarian catastrophe in Idlib Province, concrete initiatives for a safe return of displaced persons, the release of detainees and access for families to information regarding their loved ones, and humane conditions for political prisoners. All this and a renewed appeal for a resumption of dialogue and negotiations with the involvement of the international community.

I’m speechless. Has Pope Francis sent a delegation to Syria to deliver this message?

I thought that the Pope will thank Assad for fighting Wahabi terrorism that killed thousands of Christians, displaced tens of thousands of them and destroyed tens of towns that are predominantly lived by Christians, including the destruction and theft of churches.
I thought the Pope will condemn the contentious atrocities of the Turkish-Western backed terrorists in Idlib against the towns of Maharda, Souqalbiya, Salhab, including the heinous crime of murdering Diala Daher and Qamar Daher: ‪Two beautiful sisters who were butchered yesterday by the Turkish-backed jihadists in Northern Syria.

I thought the Pope will condemn Turkey for its support of Al-Qaeda and multinational terrorists, who turned Idlib into a human slaughterhouse, where people are slaughtered, beheaded, and burned alive for the slightest crime.

I thought the Pope will encourage Assad to liberate Idlib in order to bring back life, human rights, education, and businesses.

I thought the Pope will be on the right side of history. But I was wrong.

Only a few days after the heinous crime of raping the Syrian Armenian woman, Suzan Der Karkour in the town of Yaqoubiya in Idlib and later stoning her to death, the Pope has the audacity to ask President Assad to end the suffering in Idlib, instead of heading to the Brussels, Washington and Ankara, to urge the criminal leaders of these capitals to stop supporting terrorism, to lift the sanctions and let the Syrians choose their political faith.

But I have a solution for him; we ask the pope to import the tens of thousands of multinational terrorists in Idlib from Chechnya, Turkistan, Uzbekistan, Saudi Arabia, Egypt, etc and grant them humanitarian asylum, in line with the open-door policy for the refugees. And perhaps to employ these terrorists in satisfying the sexual desires of some paedophile priests in his church.

Pope Francis demands from President Assad is simply politicized, it is pure hypocrisy.