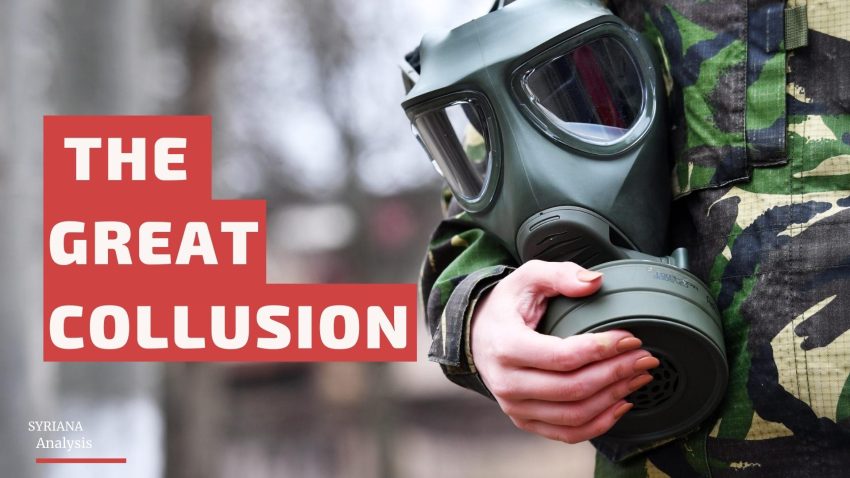 “Syria reaffirms that it will not use and has never used such weapons, which were however used by terrorist groups and western intelligence apparatuses”

25 years ago, the Chemical Weapons Convention entered into force with one purpose: to put an end to and eliminate chemical weapons once and for all. Today it is the global norm against chemical weapons.

Since 1997, over 99% of chemical weapon stockpiles declared have been verifiably destroyed. Yet chemical weapons remain one of the most serious threats to international peace and security.

Despite the progress made, one state has signed but never ratified the convention and that is Israel.

Besides the Chemical Convention, Israel refuses to sign or ratify the Biological Weapons Convention and currently has 183 states-parties.

Nevertheless, there is not much talk or criticism of Israel’s position on chemical and biological weapons, let alone the tens of nuclear warheads that Israel possesses.

All the focus is on the alleged chemical attacks in Syria, where the OPCW investigations were compromised by state and non-state actors to point fingers at Damascus and create pretexts for military intervention or imposing deadlier unilateral sanctions against the country.

Some may think that I’m exaggerating or being biased, but after numerous claims of chemical weapons use in Syria, the alleged Douma chemical attack in 2018 marked the first time that an OPCW fact-finding mission deployed on-site to conduct its own investigation, and the findings of the investigators and experts were compromised by the OPCW administration and important conclusions were taken off the final report to accuse Damascus of using chemical weapons.

This unproven allegation has led to tripartite aggression on Syria by the US, the UK and France, and the illegal attack went unpunished for more than four years to the attack.

This week, however, Josep Borrell the High Representative of the Union for Foreign Affairs and Security Policy posted a statement remembering the victims of chemical attacks in Syria vowing to continue supporting the OPCW in implementing the Chemical Weapons Convention, “independently and impartially”, but not on Israel!

“The European Union reiterates its strong condemnation of the use of chemical weapons by the Syrian Arab Republic and its failure to respect its international obligations under the Convention, as substantiated through comprehensive and thorough investigations carried out by the United Nations and the OPCW,” the EU statement said.

Coincidently, the White Helmets organization which staged the scene for the alleged chemical attack in Douma was invited this week by the European Union to contribute to a meeting on the sidelines of the OPCW’s Conference of the States Parties.

Nothing fishy or suspicious about it at all, right?

Since the OPCW is no longer sending its own staff to Syria because the last time they went to an Islamists-held area, a roadside bomb hit the OPCW’s four-vehicle convoy, and the “freedom fighters” opened fire and briefly kidnapped the inspectors.

Again, nothing fishy or suspicious about it at all, right?

Anyway, the OPCW tasked its duties to non-governmental organizations operating in Islamists-held areas, such as the White Helmets which carried out many of the OPCW’s tasks, such as identifying sampling locations; collecting and tagging the samples; gathering video and photo evidence; and, in some cases, selecting witnesses for interview.

The OPCW didn’t care less about the White Helmets biases or its embedment with Al-Qaeda and other terrorist groups and asked them to travel to Turkey and hand over the collected materials to OPCW staffers working from the hotels.

In this regard, investigative journalist Aaron Mate pointed out that the workaround violated the OPCW’s core protocol for chemical weapons probes. To ensure full confidence in the integrity of samples gathered for chemical analysis, the OPCW requires that physical evidence collection strictly ensures a “chain of custody.”

This means that OPCW inspectors must have complete control of samples from the time that they are gathered at the site of an alleged chemical attack until they are delivered to international forensic laboratories for analysis.

The OPCW’s documented procedures are unequivocal about this. If a “sample was not under OPCW custody” at any point during a mission, OPCW policy states, it “will not be accepted for OPCW verification purposes.”

The OPCW’s chain of custody requirements is so stringent that any inspector “who is not specifically assigned for evidence-related tasks” is not allowed to “deal with any item linked to an investigation site.”

As noted by Mate, the OPCW gave the White Helmets and the material it collected a full upgrade in 2017.

Fact Finding Mission reports now refer to White Helmets operatives as the “Chemical Sample Unit.” Though no chain of custody had been established, the samples furnished by the White Helmets were suddenly treated as primary evidence.

For example, in April 2017, Islamist militants in the Al-Qaeda-held town of Khan Shaykhoun accused the Syrian army of dropping a sarin bomb and killing over 80 people. The White Helmets quickly rushed to the scene and publicized the Islamists’ allegation by posting photos and videos of victims allegedly suffering from nerve agent exposure.

Unsurprisingly, the US endorsed Al-Qaeda’s claims and launched airstrikes on the Shayrat airbase from which the alleged sarin bomb was launched. Until this moment, no one poses this logical question: if the airbase has storage of chemical weapons, wouldn’t the American strikes cause gas leaks in the airbase and its surrounding towns?

In the aftermath of the US bombing, the OPCW tasked the White Helmets to gather alleged evidence and bring them to Turkey and the founder of White Helmets James Le Mesurier who was a former MI6 agent has helped select witnesses.

It doesn’t sound fishy and suspicious at all, right?

And although the entire chain of custody for the White Helmets samples couldn’t be verified, the OPCW’s fact-finding mission released a report in June 2017 and endorsed the stated pretext for the US air strikes by concluding that sarin gas was “used as a weapon” in Khan Shaykhun.

Now let’s go back to the statement of Josep Borrell. The Syrian Ministry of Foreign Affairs slammed Borrell over accusations of using chemical weapons and said in a statement “Western states and representatives of the EU went too far in misleading the international community over the alleged use of chemical weapons in Syria and Russia.”

The Ministry further said that Borrell’s statements are specifically intended “to defame the reputation of the two countries for the benefit of the West’s colonial targets.”

Some EU members and other western nations have themselves employed chemical weapons in several places across the world, the statement adds.

“Syria reaffirms that it will not use and has never used such weapons, which were however used by terrorist groups and western intelligence apparatuses… Syria also stresses it rejects the use of these weapons at any place and any time,” the Foreign Ministry concluded.