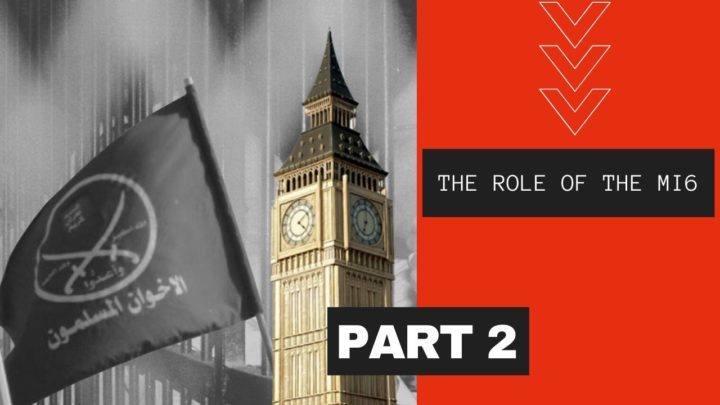 The role of Great Britain

Contrary to the Muslim Brotherhood’s claim that it is an anti-imperialist force, pan Arabists believe the Islamist organization is one of the most effective weapons of Western imperialism in the Arab world.
Founded during the British influence in Egypt in 1928, the former MI6 agent John Coleman says the MB was created by “the great names of British Middle East intelligence” and that their mission was to “keep the Middle East backward so that its natural resource and oil, could continue to be looted…”
Coleman adds that without the British, “radical Islam would have remained the illegitimate, repressive minority movement that it has always been, and the Middle East would have remained stable and prosperous.”
In an article entitled “What is the Muslim Brotherhood and Will It Take Over Egypt?” American investigative journalist Robert Dreyfuss explains that “The Muslim Brotherhood served as a battering ram against nationalists and communists, despite the Brothers’ Islam-based anti-imperialism, the group often ended up making common cause with the colonial British. It functioned as an intelligence agency, infiltrating left-wing and nationalist groups.”
In 1954, the MB’s chief international organizer Said Ramadan, the son-in-law of Hassan al-Banna, had come to the attention of both the CIA and MI-6 and Ramadan met with President Eisenhower in the Oval Office. According to Dreyfuss, Ramadan had likely been recruited as a CIA agent.
Wall Street Journal reporter Ian Johnson has since documented the close ties between Ramadan and various Western intelligence services and he wrote: By the end of the 50s, “the CIA was overtly backing Ramadan.”
Now, if we look objectively what the MB has done in the Middle East and North Africa, especially in Egypt and Syria, the MB was used as a weapon against Arab socialist leaders, such as Nasser and Assad, who a few decades ago were part of a rising tide of pan Arabism which sought, as its ultimate goal, independence from Western hegemony.
During that period, the Saudis have been the key financiers of the MB for decades for the same reasons that the US and the Western powers needed them: which is opposition to pan Arabism.
Nowadays, as the political rift increases between the MB and Saudi Arabia’s Wahabi ideology, Saudi Arabia no more supports the MB, instead, Turkey and Qatar are considered the key supporters of the organizations.
Furthermore, documents published in the book “The Secret Affairs” by the British historian and journalist Mark Curtis reveals Britain’s Collusion with Radical Islam. The author pointed out that there have been strong links between the UK and the MB since the first half of the 20th century.
Britain began financing the MB in Egypt since the 1940s, in order to hit secular political parties that were represented by the Wafd Party. According to a British intelligence report in 1942, the British Royal Palace decided that the MB was a useful group for them.
The author of “Secret Affairs” also revealed the secret funding of Britain to the MB in Egypt, in order to overthrow former President Gamal Abdel Nasser, who nationalized the Suez Canal, which led to the tripartite aggression by the UK, France and Israel against Egypt in 1956.
During the tripartite aggression against Egypt, Britain had secret contacts with the MB, and a number of religious figures, as part of its plans to topple or assassinate Nasser.
In March 1957, Trevor Evans, an official at the British embassy, who led previous contacts with the MB said: The disappearance of Nasser’s regime should be our main goal. The UK’s funding that began in 1942 continued after the death of Abdel Nasser.
According to these documents, Britain supported the MB in the face of pan Arabists who were serving as a unifying force in the region.
The UK’s main goals were:
-to preserve the state of divisions in the Middle East
-and to prevent any Arabic approach to establish a unified Arab entity
Therefore, the MB shared the UK’s hostility to Arab nationalism and undermined the Arab national rapprochement.
Besides the investments of the MB with tens of billions in Britain, the successive British governments since the forties of the last century not only provided support, protection and political asylum to the members and leaders of the MB, London also impeded the work of the INTERPOL in hunting down wanted MB members by Arab states.
In conclusion, the main goal of supporting the MB by the British and American intelligence agencies is to form a fifth column in Arab countries and a tangible replacement for the current regimes by an organization which contrary to its claims resorts to terrorism, assassinations, and Islamization of the societies. Therefore, the MB is without a shred of doubt a regressive force which serves the project of creative chaos in the Middle East and North Africa.
In the next part, I will address the MB’s rebellion against Hafez al-Assad in 1982.

Is the Muslim Brotherhood a Terrorist Group?

What is the Muslim Brotherhood?

Unmasking the Muslim Brotherhood: Syria, Egypt, and Beyond

What Is the Muslim Brotherhood, and Will It Take Over Egypt?

The “Revolution” that destroyed Syria (+18)