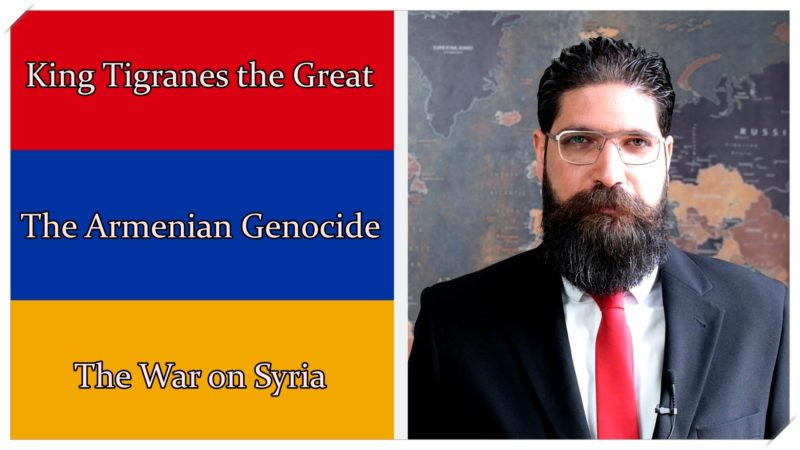 History of the Armenian presence in the Levant

The Armenian presence in Syria and the region dates back to the era of King Tigranes the Great between 95 and 55 before Christianity. This king, who was named by the Roman consul Cicero as the “King of Great Asia”, has established the most powerful state in the eastern Roman Empire, with its capital “Dikranagerd”, currently located in southeastern Turkey.

King Tigranes the Second invaded Syria in 82 BC after Salukin rulers and princes fought among themselves on the throne. He occupied northern Syria first, then went to Sidon and Tire until the whole of Syria became under the control of the Armenian Empire.

King Dikran’s reign lasted about 14 years, until 67 BC when the Roman leader Pompey the Great invaded Armenia and ended the rule of the Armenian Empire in Syria and returned to the rule of the Seleucids.

Later, in two historical incidents, the Armenians also came to the Levant but this time as refugees:

The Status of the Armenians in Syria and Lebanon

During the last century, meaning after 1915, Armenians, particularly in Syria and Lebanon were quick to integrate, they were also affected by and affected positively other communities. They brought with them a lot of cultural, social, craft and professional skills.

On the other hand, Syria and Lebanon provided the Armenians enough freedoms to achieve economic prosperity and the practice of social, cultural and religious activities. They established Churches, schools, associations, cultural and sports clubs, etc.

Almost a hundred years after the Armenian Genocide, the AKP government of Recep Tayyip Erdogan appears to have proven William Faulkner’s saying: “The past is not dead. In fact, it is not even past.”

Turkey intervened in the Syrian crisis from its early stages. Erdogan – along with other countries – provided anti-regime forces safe havens inside Turkish territories and turned a blind eye to the influx of foreign fighters into Syria, including some from Chechnya and other Central Asian countries. Those fighters formed the strongest elements of ISIS, al-Qaeda and other affiliated groups.

While Syrian-Armenian parties did not officially engage in the ongoing war – apart from young Syrian-Armenians who are conscripted into the army – the Armenian community was not spared from the systematic targeting of ethnic and religious minorities by anti-government forces, such as the St. Kevork Church in Aleppo, the Armenian Catholic Church in Raqqa, Armenian Genocide Memorial Church in Deir Ezzor, among many other churches, schools and institutions.

Most importantly was the invasion of Kessab in March 2014 which was waged from three border points inside Turkish territories.

The attack has forced at least 2,000 ethnic Armenian civilians to seek refuge in Latakia and other neighbouring hills. For Syria watchers, this incident further highlights the systematic targeting of Christian communities in the country by anti-government groups.

Similarly, after the occupation of half of Aleppo by the Turkish backed terrorists, the Islamists fired thousands of rockets and missiles on the residential areas in western Aleppo, including neighbourhoods that are predominantly Armenian, such as Nor Kuigh or Al-Midan neighbourhood.

Most of the third and fourth generation of Armenian Syrians heard of the massacres committed by the Ottomans against their ancestors. They saw the pictures and have read the documents, but they never imagined that they might witness the same brutality by the neo Ottomans against the people of Syria.

Therefore, comparing the Armenian genocide with the current events is one of the axioms, especially since most of the armed groups leading the war against the Syrian people in northern Syria belong to Turkish intelligence.

Since the outbreak of the war on Syria in 2011, about 70,000 Armenians have left Syria, according to the Ministry of Diaspora in Armenia, in a statement to “Sputnik Armenia”.

In addition to Armenia, the main travel destinations of Syrian Armenians were Lebanon, Jordan, Canada, Sweden, the United States of America and Australia.

Although the report stated that 25-30,000 Armenians still live in Syria so far, unofficial reports claim the true figures are certainly much lower than 17,000 Armenians across Syria, which is considered one of the largest streams of Armenian emigration outside Syria since decades.

The successive Armenian governments enjoyed friendly relationships with the Syrian counterparts. And after 2011, Yerevan offered humanitarian help not only to the Syrian refugees in Armenia but also to the Armenians who are still in Syria.

For example, only lately, Prime Minister Nikol Pashinyan said “If our medic has saved the life of a person there whose grandfather has in 1915 helped one of our compatriots who survived the Armenian Genocide, given them a piece of bread or a glass of water, I find that we are repaying our historic debt to the Syrian people.

If in a de-mining zone, where children are running and playing, our experts are clearing 100 square meters of area for the grandchildren of those people who at a time had given refuge to our compatriots who survived the Armenian Genocide, I think this is a historic mission that we are carrying out in Syria.

Does this mission have risks? Of course, it does. But does this really increase Armenia’s sovereignty and international subject matter? Yes, it does,” Pashinyan emphasized.

He also said the humanitarian mission in Syria is a morally, humanly and politically correct mission.

Will the Syrian Armenians return to Syria?

This is a hard question to answer. Between 2012 and 2015, I was saying the Armenian asylum to neighbouring or distant countries is temporary, and they will return when peace is restored. But the war has not ended yet and after 2016 it has become clear that most Armenians who left Syria have started to build their new lives abroad, through education or work. Therefore, The return of Armenians to Syria inversely proportional to the length of the war.

If you appreciate my freelance work, I invite you to become my Patron to support my channel.