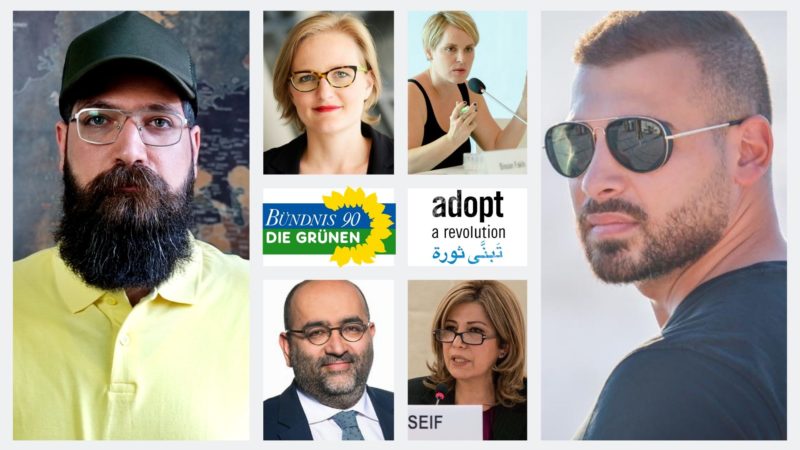 A few days ago, I attended a political event entitled “Die Zukunft Syriens. Perspektiven eines zerstörten Landes” or The Future of Syria. Perspectives of a ruined country, organized by the German Green Party, which is considered a liberal left party, in cooperation with an organization called Adoption a Revolution. Frankly, the organizers have put a lot of effort into organizing the event; there were nearly 200 attendees, between speakers and extras, in order to make a sitcom and broadcast it live on YouTube.

There were no patriots in the event, except myself and my friend Manaf Hassan, a Syrian German political expert, who was eager to give a strong speech to reveal the hypocrisy of the Green Party.

The representative of Adopt a revolution and two Green Party MPs also held biased speeches, which serve the interests of the terrorists. Period.

The funny thing is the representative of Adopt a Revolution was tweeting during the event about me and calling the office of migrants and refugees in Germany to deport me from the country.

Anyways, the speakers tried to convince us that the Green party supports secular movements and civil society in Idlib. If Idlib is mainly controlled by Al-Qaeda, so under whose command working these so-called civil movements?

However, as I mentioned, Manaf destroyed this theatre, and my silent presence in the hornet’s nest, among the radicals who won’t hesitate to behead me and hang my head on the Reichstag. This led to a lot of tension and insults from the radicals to me which is an unsurprising behaviour from those carrying the banner of the so-called revolution.

Now hear me well, and I know you are watching my channel; I am Syrian, a patriotic Syrian, and life for me is a matter of dignity. Are you threatening me with physical assault or deportation from Germany? I feel sorry for you, I really do.

Because I have a homeland. I have not and will not sell Syria in exchange for a job or scholarship. But you are without honour, you would sell your mother for your narrow interests.

And one last word, Syria may forgive you, but we will not forget what you did, and we will despise you every single day.

In the era of corporate media empires, you can empower independent journalists like me through Patreon to survive, report and continue spreading the truth.