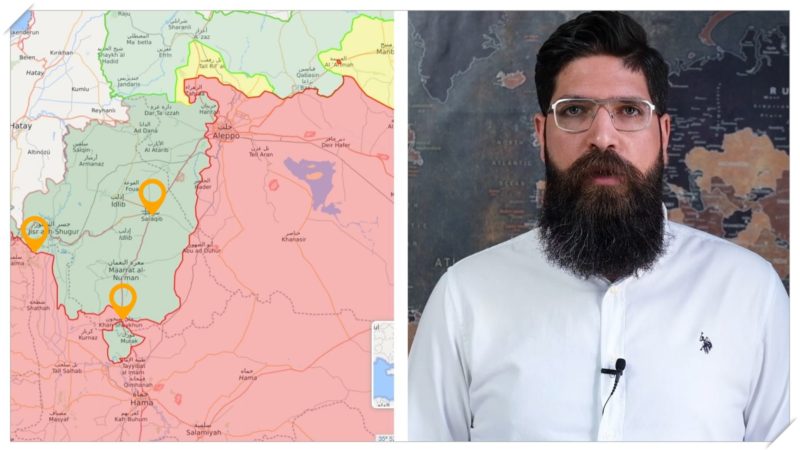 The Syrian army achieved one of the important military goals in Idlib by liberating KhanShaykhoun and establishing a foothold on the M5 highway, consequently blocking reinforcement to the militants trapped in Morek, Kafr Zayta and Latamneh.

In fact, it is a matter of time for these towns to fall into the hands of the Syrian army.

During the previous years, we were pointing our fingers to Erdogan’s Turkey in supporting the terrorists in Idlib, but this time, Turkey decided to weight in directly and sent a military convoy to save its proxies in Khan Shaykhoun, but the Syrian air force bombed the surrounding areas of the Turkish occupation forces, forcing them to stop. This precedent is an important indication that Syria is not going to tolerate the illegal presence of Turkey in Syrian towns.

If we check the map of control over Idlib, we realize that the Syrian army adopted a military strategy that aims to besiege several towns altogether. This strategy is called “the Tiger’s grip”.

After achieving this goal, the Syrian Army is in front of two options:

As you can see, the battle for Idlib is raging and the priority is to reopen the highways that link Syria’s main cities to each other, especially Aleppo to Idlib and Latakia, and Aleppo to Hama, Homs and Damascus. It is true that the Syrian Army freed Aleppo in December 2016, but since Aleppo is the heart of Syria’s industry, the liberation can’t be meaningful without the ability of Aleppo’s factories to import and export.

Obviously, Erdogan knows that he cannot hold on to Idlib any longer, therefore Ankara is holding rounds of talks with the US, in order to create the so-called safe zone in northern Syria, which is nothing but a fancy way to replace the term occupation. The proposed safe zone is planned to grab between 10 to 30 KM from Syria’s territory, to change the demographics of the region and finally hold a referendum that calls for joining Turkey.

This might sound surreal to some, but Turkey already occupies the Syrian Iskandarun since 1939, when the French mandate that was occupying Syria withdrew from Iskandarun, allowing Turkish forces to invade the area and held a referendum.

The referendum has been labelled both “phoney” and “rigged”, and a way for the French to let Turks take over the area, hoping that they would turn on Hitler. For the referendum, Turkey moved tens of thousands of Turks into Alexandretta to vote. These were Turks born in Hatay who were now living elsewhere in Turkey.

In two government communiqués in 1937 and 1938, the Turkish government asked all local government authorities to make lists of their employees originally from Hatay. Those listed were then sent to Hatay to register as citizens and vote.

So, what has changed between 1939 and 2019? Unfortunately, the mentality is the same and it seems Erdogan’s Turkey has learned a lot from the occupation of Israel.