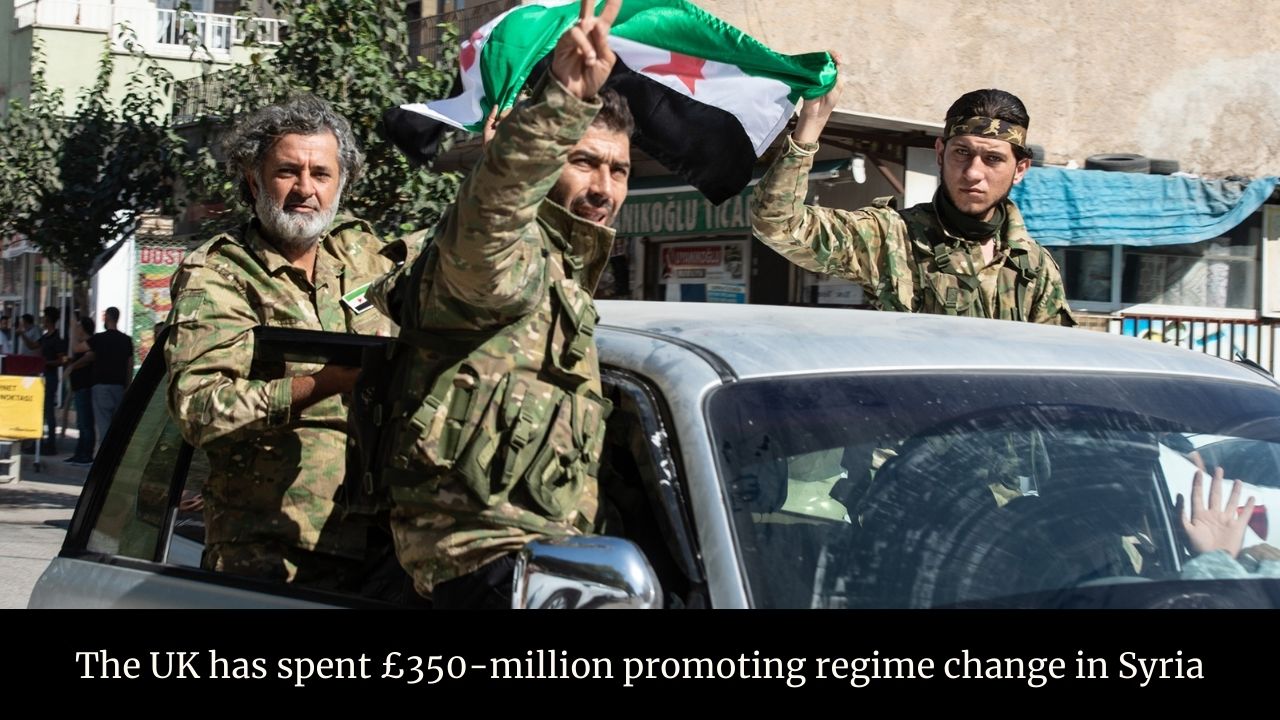 While the UK claimed that several projects have directly supported the “moderate” armed opposition fighting the “regime” of President Bashar al-Assad, facts on the ground indicate that “moderate rebels” do not exist and Islamist terrorists are, in fact, carrying the fight against Assad.

The controversial Conflict, Stability and Security Fund (CSSF) has used large amounts of money from the British aid budget in areas of Syria where extremist groups are prevalent.

The author of the article Mark Curtis is confident that the UK has pursued with this subsidy “to install a pro-Western government in Damascus and nurture opposition-held areas as an alternative to Assad’s rule.”

The UK offers inconsistent numbers on what extent it backs up the Syrian opposition. It was communicated to the parliament in March 2018 that funding like these through CSSF is approximately calculated to be 32 million pounds for the period of 2011-17, which contained “political support and non-lethal equipment”.

Nonetheless, a few months back, in September 2017, Lord Ahmad, who is the foreign minister, stated that the CSSF funding for Syria is approximately calculated to be 199 million pounds for the three years to 2017-18.

Lord Ahmed stated that this counted in funds to “those groups opposed to Daesh [Islamic State] and Assad as well as Syrian civilians and their communities”.

Back in December 2015, the UK government specified it had offered “more than 67 million pounds” to the opposition of Syria, counting armed opposition, the Syrian National Coalition and “media activists”.

Declassified was capable of stating that in the period of 5 years, the CSSF has subsidised thirteen projects worth 215 million pounds that support the Syrian opposition and its delivery of facilities in areas held by the so-called rebels.

For a long time, the UK has been a momentous supporter of the media operations of the Syrian opposition. In 2016, Journalist Ian Cobain exposed that the UK government was “waging information warfare” in Syria by backing media actions for some aggressive rebel groups.

The UK financed five covert events in Syria that started in 2012, including the formation of a citizen reporters’ network throughout the state to shape insights, views and opinions of the dispute.

As per an internal review of the initiative revealed by Cobain, these secret propaganda programmes were “poorly planned, probably illegal and cost lives”.

It has been prospected that some of these projects might be running still. A programme called “Future Syria Programme”, which is valued to be around 6.96 million pounds in the period of 2019-2021, presents one goal as: “Russian/regime narratives are challenged, and disinformation countered.”

UK’s secret action in the Syrian war has been noticeably under-reported as well as miss-reported in the United Kingdom mainstream media. Even though the media has extensively concealed UK armed actions against ISIS, its secret manoeuvres countering Assad and in the sustenance of opposition groups have attracted consideration to a very small extent.

The mass media has repeated administration lines regarding massacres and violence stanched by the Assad government; nonetheless, opposition powers have been offered a free pass mostly. A lot of reports fail to note that in quite a lot of parts of Syria, rebel groups are subjugated or prejudiced by radicals. Evidence suggests Britain began covert operations against the Assad regime in late 2011 or early 2012.

The external intelligence agency MI6 was allegedly taken part in the transportation of the arms and ammunition, training and systematizing the opposition in a covert operation with its allies from the United States and the Middle East.

Therefore, covert and overt policies in support of Syrian rebels by foreign actors such as the UK helped to turn the uprising into a civil war and contributed to prolonging it, according to Mark Curtis.