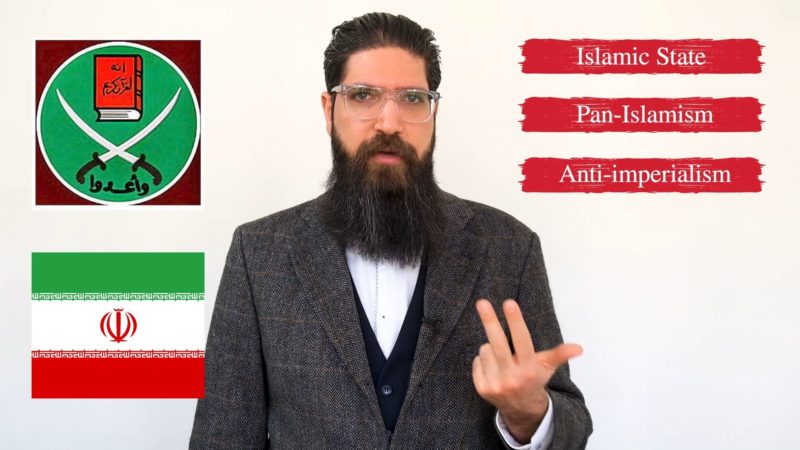 One of the strange relationships that I addressed in the previous video, you can watch it here, is the Iranian adherence to Erdogan and the Muslim Brotherhood movements in the region, except in Syria, where the Iranian backed forces fight the Muslim brotherhood.

In this video, I will address the reasons behind this unholy alliance.

For starters, the Iranian leadership since the Islamic revolution in 1979 is Islamic Shiite and the MB is a transnational Sunni Islamist organization founded in Egypt by Islamic scholar Hassan al-Banna in 1928.

Despite the crackdown, the group is spreading all over the Muslim countries since its foundation but it remained a fringe group in politics of the Arab World until the Six-Day War in 1967, after Israel managed to defeat several Arab nations and hence the MB Islamism managed to present itself as a potential alternative to secular Arab nationalism.

In 1982, the MB tried to remove Syria’s late President Hafez al-Assad through violence and terrorism, but the latter managed to crush the Islamist rebellion.

The MB remained a banned group for decades in Arabic states governed by Pan Arab governments and considered a terrorist organization, like in Syria.

MB and the Arab Spring

The MB didn’t lose hope and worked silently in gaining social influence through Mosques, financial support to the poorest classes and ideological indoctrination, until the Arab Spring erupted in 2010, when the MB took the opportunity to present itself as a real alternative for the corrupt regimes.

Therefore, the Arab Spring brought the MB legalization and substantial political power and paved the way for the legalization of both the Tunisian Islamic party Ennahda and the Muslim Brotherhood of Egypt in 2011.

In October 2011, Ennahda Party won 37 % of the vote making it the strongest party in the Tunisian legislature and hence formed a government till 2014, which preceded by an uproar in the traditionally secular country over Islamization and assassinations of two secular politicians.

In Egypt, the 2012 presidential election brought candidate Mohamed Morsi as Egypt’s first MB president until 2013, when he was ousted by a military coup led by Marshal Abdul Fatah Sisi.

Similarly, in Syria, the MB with the help of Qatar and Turkey managed to trigger a war in 2011 which is lived till today, but the Islamist party lost its second chance in Syria after the first attempt in 1982.

Commonalities between Iran and the MB

As an observer, I understand why Qatar and Turkey whose leaders share the same ideology, supporting the MB in the MENA region and abroad, but why is Shiite Iran supporting a group which not only despises Iran and Shiism, but also the popular base of the MB considers the Islamic Shia sect as Khawarij or deserters from Islam.

Ideologically, and according to their own literature, there are three significant commonalities:

– establishing an Islamic state where religious law, the shari’a, must prevail as a comprehensive governing system for the individual and society

– advancing pan-Islamism to try to unify the Islamic Umma

– and hatred of Western imperialism

From the MB side, the attraction of the Iranian revolution was the inspiration it provided to believe that an Islamist revolution was possible. If Iran, whose ruler, the Shah, was the most powerful in the area and the most closely aligned with the West, could fall to the theocrats, then it meant the MB’s dream of an Islamic state of their own in places like Egypt was not so far-fetched.

The MB also pursued the strategy of attracting the working classes and the leftists, a strategy best explained by the Tunisian MB leader Rashid al-Ghannouchi who said the language his party gave is to “Islamize some Leftist social concepts and to accommodate the social conflict within an Islamic context”.

Geopolitics of Iran vs. the MB relations

In Iran’s relationship with the MB, geopolitics plays a crucial factor. For example, when the Syrian MB revolted against Hafez al-Assad in 1982, it received vast support from Assad’s Ba’athist rival in Baghdad, Saddam Hussein. Whereas Iran, then-engaged in a brutal war with Saddam Hussein, supported Assad in his struggle with the MB. Similarly, in 2011, when the MB revolted against Bashar al-Assad in 2011, Iran sided with Assad against the MB.

Odd enough, while former President Morsi cut Egypt’s diplomatic relations with Syria and declared jihad against Assad, Morsi had improved Egypt’s relations with Iran and in 2012, Morsi himself visited Iran, the first visit of an Egyptian leader in Iran since the 80s when the two broke off diplomatic relations. Then the former Iranian president Mahmoud Ahmadinejad attended an Islamic summit in Cairo in 2013.

Another Iranian MB connection is undoubtedly Hamas, which also receives support from Qatar and Turkey. During the Syrian war, Turkey, Qatar and the MB stood against Assad, whereas Iran supported him.

In November 2019, the Intercept and the New York Times released leaked Iranian intelligence document detailing Iran’s cooperation with the MB. The two sides are natural adversaries in the long-running religious and ideological conflict between Shia and Sunni Muslims.

In Iraq, Iran has been supporting Shia forces that have clashed with Sunni groups.

In Syria, Iran is an ally of President Bashar Assad, who has been fighting radical Sunni terrorists for almost nine years.

Despite these fundamental differences, both sides have begun negotiations to initiate a secret rapprochement, which took place in particularly tense Middle East geopolitical context, especially with the rise of Daesh in Iraq and in Syria in 2014, and Riyadh’s support of Marshal Abdel Fattah al-Sissi who removed MB President Mohamed Morsi in 2013.

The source claimed that the MB leaders emphasized during a highly classified meeting with the Iranians in Ankara in 2014, that they should “focus on joint grounds for cooperation.” They also suggested that Iran and the MB join forces against Saudi Arabia, their “common enemy,” and discussed possible collaboration in Yemen.

The MB said during this meeting that “Yemen seemed to be the appropriate terrain for such a war, given the influence of both parties on Shiite and Sunni tribal components”. Iran being able to rely on the Houthis in Yemen, while the MB had total control over Sunni tribal armed factions, thanks to the MB’s Islah movement and its alliances with tribal leaders.

As we see, even in the heightened sectarian atmosphere in the Middle East after the Arab Spring, the Islamists have more in common with one another than with the general masses of Muslims who are trying to build and rebuild normal lives after a period of turmoil.

As such, the likelihood of cooperation will remain high, and policymakers should have this in mind when trying to construct a strategy to contain Islamist movements in the MENA region.