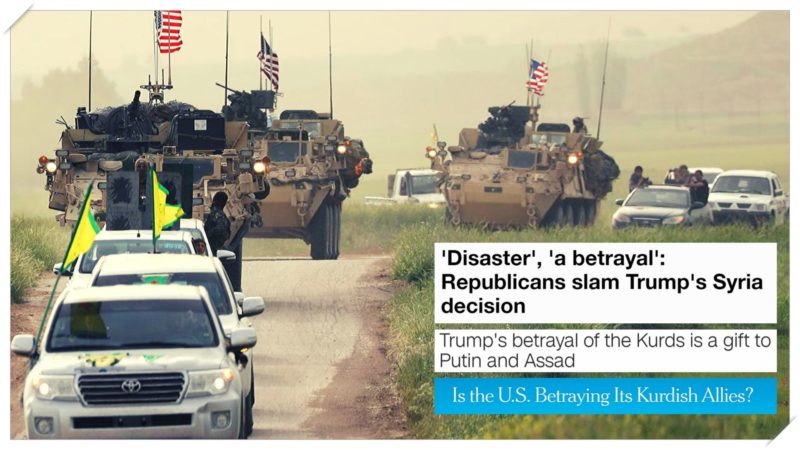 The US troops began withdrawing from northeast Syria ahead of a Turkish invasion that aims to create a so-called “safe-zone” in Northern Syria, which is practically an area where Turkey will force the Kurdish fighters to leave and settle hundreds of thousands of Syrian refugees, a move perceived in Damascus as an attempt to change the demographics of the area in order to create a geographic belt inhabited by pro-Erdoganists, and later call for a referendum and joining Turkey.

This move by Trump’s administration sparked anger among the democrats and so-called western left that once again proved that many of them are ignorant and delusional enough to serve as a weapon for the American empire.

The script is written by Jay Tharappel – Political Commentator:

Stop whining about poor “Rojava” being betrayed as if we should all be deeply upset that the US is withdrawing from illegal occupation.

Prior to the illegal US intervention in Syria on September 2014, the YPG had, essentially, a non-aggression pact with the Syrian government so they could both concentrate on fighting the common enemy, that is, al-Nusra and ISIS, and by April 2011 the Syrian government had granted citizenship to the 300,000 stateless Kurds.

They attempted to dislodge the Syrian National Defence Forces and Assyrian militia checkpoints in Hasakah in January 2016. Then in June and August 2017, they got the US to shoot down Syrian jets that were targeting ISIS because they wanted to grab as much land as possible, land that was historically never even Kurdish. They say they have “no friends but the mountains” and yet they find themselves deep within the plains of historically Arab/Assyrian Syria.

In December last year when the US threatened to withdraw, the YPG threatened to release 3,200 captured ISIS prisoners to “raise awareness”, prompting the Syrian government to divert its forces to Deir al-Zour just in case they made good on their promise, they didn’t, because the US stayed.

In July this year, it was revealed that the YPG were selling stolen Syrian oil to “Israel” via their agent, Mordechai Kahana, whose company, the “Global Development Corporation”, has been awarded the right “to represent the Syrian Democratic Council (SDC) in all matters related to the sale of oil owned by the SDC” according to leaked documents.

These oil assets are Syrian state-owned property, which prior to the war supplied oil at subsidised prices to all Syrians, however, now it’s being sold to “Israel”, Syria’s enemy, while Syria is forced to rely on shipments sent by Iran around the tip of Africa, which then gets seized by the British navy, all because the SDF would rather sell to “Israel” rather than to their fellow Syrians.

The Syrian government’s frustration with the YPG is therefore entirely understandable. The YPG will not tolerate Turkish backed Al-Qaeda/FSA or ISIS militias on the territory they control but had no problem allowing the US to bomb Syrian forces, even if it meant raising the possibility of the rest of Syria being overrun by the same forces that they want the entire world to save them from.

Also, the Kurds are not the poor oppressed victims of history, they are a proud martial people, who for centuries were well represented among the ranks of successive Islamic hegemons, beginning with Salahadeen Ayyoubi, the Sultan of Egypt and Syria who defeated the Crusaders (and slaughtered Shiites after overthrowing the Fatimids).

When the Zamorin of Calicut (city in Kerala, i.e. my people) needed help against the powerful Portuguese navy of Catholic sea terrorists, the Mamluks sent Amir Hussain al-Kurdi who defeated the Portuguese at the Battle of Chaul in 1508 alongside the Sultanate of Gujarat.

During WW1, the Arabs took up arms against what they considered Turkish imperial rule after centuries of being economically underdeveloped, the wealth of the empire being concentrated in western Anatolia, and a period in which Yemen suffered terribly from Ottoman invasions.

Back then Kurds mostly sided with the decaying caliphate against the forces of Arab self-determination, while taking part in the genocides committed against Armenians and Assyrians artificially tipping the demographic scales in their favour. The PKK, to their credit, acknowledged this tragedy and have apologised for.

The point isn’t some simplistic “Kurds are bad” argument, but that the narrative about Kurdish victimhood, which is quite fashionable among western liberals/leftists these days, flies in the face of history entirely, and has been contrived since 2014 to justify an illegal US occupation of Syria.

If the YPG doesn’t want Turkish aggression, then they should allow Syria to reclaim sovereignty over all territories east of the Euphrates, which would mean they’d gain the protection of Russia and Iran as well. The fact that they’re well-armed now means they have bargaining power against Damascus to push for greater national rights.