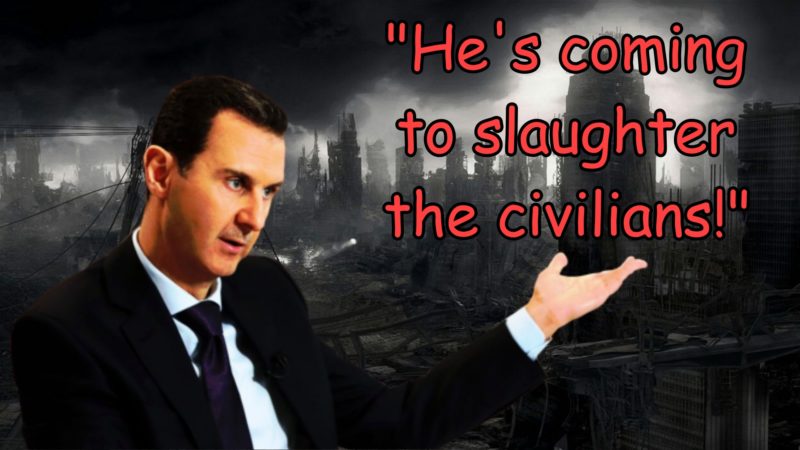 Since the beginning of the offensive of the Syrian Army against the Islamist terrorists in Idlib, we are receiving the following question through private messages and comments: why the civilians of Idlib are escaping to Turkey and not to the government-held areas?

This is a very good question, and it is a sensitive one, but I promise to be as objective and transparent as possible because Syrian civilians are a priority, and it doesn’t matter whether they are in Idlib, Aleppo, Homs, Damascus or Der Ezzor. So, first of all, we have to be very precise about the description of the situation in Idlib. This governorate is the largest safe haven for AL-Qaeda terrorists since 2001. This is not my words, but rather a confession by the US. And since Idlib is mainly controlled by Al-Qaeda, the military operation of the Syrian against this terrorist organization and any other terror group that is affiliated with it is not only legitimate according to the Syrian constitution but also according to Sochi and Astana understandings which excluded Al-Qaeda, ISIS and any group that is affiliated with them. So, when the western governments call for a truce in Idlib, they are basically asking Syria and Russia to hold a truce with internationally recognized terrorist groups. This context is critical before answering your following question: why are the civilians escaping to Turkey? Well, to be clear, not all civilians escaping to Turkey, but there are certainly tens of thousands of them trying to pass the border to Turkey, and I will divide them into 3 categories:

1- Human shield: Some of them are escaping to Turkey because Al-Qaeda has been using them as human shields in the last 8 years and they know what happened to the civilians when they tried to pass the humanitarian corridors opened by the Syrian and Russian armies in Aleppo, Eastern Ghouta, Daraa, etc. The civilians who tried to escape the militant-held areas were either sniped from their back or the corridors were shelled. So, passing through the humanitarian corridors that the Syrian army opened in Idlib is very dangerous and could be deadly.

2- Indoctrination: Eight to nine year of occupation of Idlib by Al-Qaeda is a very long time. And during this period Al-Qaeda and the so-called humanitarian NGOs who were active in Idlib have indoctrinated the civilians there to hate the government and told them that Assad is coming to slaughter every each of them. They also played the sectarianism card by telling the people that the Alawi and Shia militias are coming to ethnically cleanse the Sunni Muslim of Idlib. So, it is better to accept Al-Qaeda rule and its Islamic laws rather than the infidel regime that is coming to spread vices and convert them to another sect in Islam. Of course, this is completely untrue and the best examples are Aleppo and Eastern Ghouta where hundreds of thousands of refugees and internally displaced people who belong to the Sunni sect have returned to their cities and nothing has happened to them.

3- Families of militants and terrorists: I’m not here to tell you that all the fighters in the ranks of Al-Qaeda are foreigners. Of course, there are tens of thousands of multinational terrorists fighting in Idlib against the Syrian government but also tens of thousands of them are also Syrians. So, the families of these militants are afraid of revenge and escaping to Turkey is their best option. However, the government received tens of thousands of families in the last years in temporary refugee camps and I know for sure that many of them were the families of the militants and when the doctors or social workers were asking a displaced woman where is your husband, many of them say: he is fighting against the government.

So, these are the main factors of why some of the civilians in Idlib escaping to Turkey. If you know any other major factor, please let know in the comments.